EMIRATES, one of the world’s leading international airlines, will add at least 1 600 seats a week on its Harare-Lusaka routes through the introduction of a Boeing 777-300ER on its daily flight from Dubai beginning February 1.

In a trading update yesterday, the airliner said the A354-seat Boeing 777-300ER, the longest passenger aircraft ever to touch down in Harare, will replace a 237-seat Airbus A330-200 on the route — a capacity increase of more than 50%.

According to the airline, more than 55 000 passengers have travelled with Emirates on the Dubai-Lusaka-Harare route since it resumed servicing the route in February last year.

“Our Lusaka and Harare service has come of age and with demand continuing to increase, this is the right time for Emirates to be expanding its capacity,” Emirates’ senior vice-president commercial operations for Africa Jean Luc Grillet said.

“With the introduction of this larger aircraft, we will offer almost 5 000 seats total every week on the route between Dubai, Lusaka and Harare.”

Emirates’ key destinations for Zambian and Zimbabwean travellers include Dubai, Guangzhou, Beijing, Hong Kong and Bombay.
The Boeing 777-300ER is the backbone of the Emirates fleet, with 82 in service and a further 69 on order.

Official figures show that since the route was launched, Emirates has carried more than 5 000 tonnes of cargo on the route, thereby enabling companies to export goods across the globe.

Popular commodities being shipped include perishables such as vegetables and flowers, while imports include pharmaceuticals and mining equipment.

The arrival of the larger aircraft, according to Emirates, would result in an increase in cargo carrying capacity of some 22% to more than 18 000kg per flight.

“The Boeing 777-300ER aircraft forms the backbone of Emirates’ fleet and its introduction on the Lusaka-Harare route reflects our commitment to quality.”

Emirates airline, one of the fastest growing airlines in the world, has received more than 500 international awards for excellence and has over seven million loyal Skywards members worldwide.

Emirates flies to 128 destinations in 74 countries and operates 195 wide-body Airbus and Boeing aircraft. 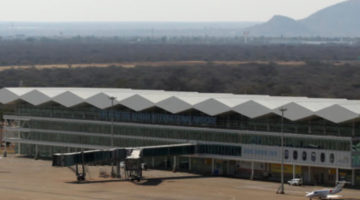