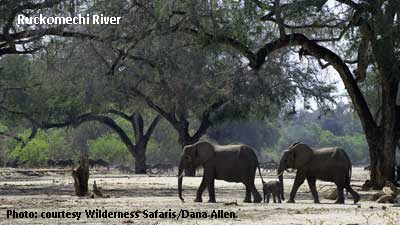 The Zambezi Society is delighted to report that the Zimbabwe National Commission of UNESCO, which is responsible for overseeing matters of relevance to the country’s World Heritage properties, has taken seriously the concerns about mining exploration within the Mana Pools/Sapi/Chewore World Heritage Site brought to its attention by the Zambezi Society.  Earlier this year, UNESCO and a group of government stakeholders undertook a site visit to Mana Pools.  This was followed by high level detailed consultations with technical and legal advisors in the public and private sectors.  As a result of its findings, UNESCO Zimbabwe has advised the World Heritage Centre in Paris that it strongly “discourages mining or mineral exploration in the World Heritage property and its immediate environs” and that the mining project on the Ruckomechi and Chewore rivers will not be allowed.  It states that such a project “negatively impacts on the Outstanding Universal Values of the World Heritage Site” and that mining activities would “jeopardise all conservation initiatives within the Park”.

If the project proponents ignore the recommendations of UNESCO, Zimbabwe will be faced with a situation where UNESCO may withdraw World Heritage Site status for the Mana Pools-Sapi-Chewore area and place the property on the “Sites in Danger” list.

In the meantime the Zambezi Society has met with the Zimbabwe Tourism Authority to brief them on this issue and our concerns about it.  The ZTA is preparing for Zimbabwe to co-host with Zambia the next meeting of the United Nation’s World Tourism Organisation (UNWTO) in Victoria Falls in August 2013.

Things have gone ominously quiet since the stakeholders meeting held on 31 August 2012 by the proponents of this mining exploration project (Habbard Investments) and the consultants appointed to undertake an Environmental Impact Assessment (EIA), (Impaco). Impaco promised to arrange an interview with the Zambezi Society soon after this workshop but, in spite of our prompting this has not materialised. A further attempt to arrange a meeting was made recently– this seems to have failed. It is with disappointment that we note that due process is not being followed. Stakeholders were criticised by the proponents for talking about this issue in the public domain. Sadly this “closed door” approach leaves stakeholders with few alternatives.

The Zambezi Society has been finding out more about what heavy minerals sands mining might involve.  We stress that the current EIA process is seeking permission only to EXPLORE,  not to mine.  However, the next logical step would be for the proponents to apply for a mining EIA.    Two potential mining methods are possible.  Both would unavoidably have adverse impacts on the river and its environs. The most likely mining method (Dry Mining) would be highly destructive.  For more detail, on possible mining methods and their implications, click on the downloadable PDF document below:-

Meanwhile, close reading of the Zimbabwe Parks & Wildlife Management Act shows that the Mines and Minerals Act does NOT (as is often thought) supercede all other Acts of Parliament (and effectively give mining a free rein).  The ultimate responsibility of allowing mining operations within a National Park lies with Zimbabwe’s Minister of Environment or the President.   This raises interesting potential for recourse to the law should the necessity arise in defending Mana Pools & Chewore from mining activities.  However, this would be an expensive exercise for which the Zambezi Society will require substantial funding.

If you are in a position to help, we would like to hear from you.  (See the Funding Appeal HERE).

Next post Victoria Falls: thrills but no spills at ‘the smoke that thunders’ in Zambia