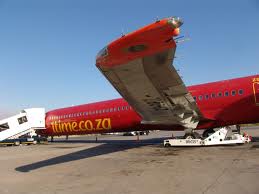 Cape Town – It’s official – low-cost airline 1time is bankrupt and in liquidation after a final meeting with stakeholders on Friday afternoon.

The airline’s final flight was at 15:00 on Friday and no further flights are scheduled, a 1time executive confirmed to Fin24.

1time has been under business rescue for a few months under the sterling leadership of new CEO Blacky Komani.

Following shortly after the liquidation of Velvet Sky, this comes as a blow to South African consumers