THE Civil Aviation Authority of Zimbabwe has approved the launch of a helicopter company, Chikopokopo Helicopters, controlled by the proprietors of Fly Kumba, the low cost airline that halted operations in January after only a year in the skies.
A company spokesperson confirmed the launch of the new airline to The Financial Gazette’s Companies & Markets (C&M) last week, indicating that their target was to fly over 20 000 passengers per annum for the Flight of Angels in Victoria Falls in the first year.
Chikopokopo Helicopters commercial manager, Lloyd Muchaka, said they were also targeting contracts in mineral exploration and transportation, medical air rescue services and ad hoc corporate hiring.
“We are targeting to fly 60 passengers per day in Victoria Falls,” Muchaka told C&M.
“That is what we want to achieve in the first year. We will be starting the Victoria Falls Flight of Angels soon. We have finished our helipad and we will be using two helicopters there,” he said.
Named after David Livingstone’s famous comments about the falls, the ‘Flight of Angels’ describes any sightseeing trip over the Victoria Falls that uses small aircraft, microlight, helicopters or ultra-light aircraft.
It is an excellent way to get a feel of the geography of the attraction, and is worthwhile if tourists want to appreciate the falls.
However, the near monopoly of the service by a few firms operating helicopters in the resort town had resulted in high charges which hover around US$130 per 15-minute flight.
“We want to make it (Flight of Angels) affordable for the local market; we want to make it accessible because it has been traditionally for foreigners. Local tourists can’t afford,” said Muchaka.
Together with South African based Zimbabwean investor, Patrick Chapwanya, Muchaka launched Fly Kumba last year, riding on the confidence that the end of political and economic turmoil in the country in 2009 would push tourist arrivals and lift opeerations.
It offered competitive fares which were half the cost of what Air Zimbabwe charged and four times less than the South African Airways fares.
Fly Kumba operated a Boeing 737-500 airliner leased from Air Namibia.
But in a country where at least 45 global airlines stopped flying at the height of the political crisis and hyperinflation, it was always going to be difficult for new, smaller, private airlines to withstand the high cost of operations in Zimbabwe.
“It is not an easy business,” Muchaka said last week.
“But with helicopters, the costs are relatively low compared to fixed wing planes. You only fly when you have the passengers, which you cannot do with planes,” he said.
In July the Zimbabwe Tourism Authority (ZTA) projected a steady rise on tourist arrivals into Zimbabwe in 2012, through to 2013 and tour operators are expected to benefit from the upsurge.
The surge could give a boost to the business.
“The United Nations World Tourism Organisation forecasts continued growth in international tourism in 2012 although at a slower rate,” the ZTA said in its report for the first quarter of 2012.
“Zimbabwe is expected to ride on this positive trend in 2012 especially considering the improvement of the country’s image and economy which has seen many regional tourists coming into the country for shopping and business. Positive trends in 2012 are also expected to hinge on improved accessibility as more airlines are expected into the country,” said the ZTA. 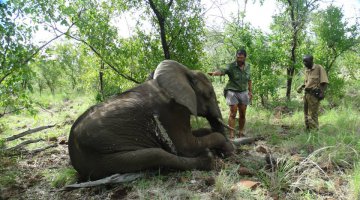 An elephant is saved..