Bungee jumping is the purest form of adrenaline. It is better than jumping out of a plane. You stand out on the edge and look down, and there is nothing between you and certain death except for a little cord attached to your ankles. You stare at the ground as you plummet off the edge. Your mind is not your own as you see the rocks and water approaching.

Then all of a sudden the chord pulls you back to your senses and you get that coveted ground rush. At the apex of your jump, your body and guts are torn back toward the heavens. At this point it is the best feeling on Earth. Nothing is better.

I have bungee jumped more than 25 times and have done all the highest jumps in the world. Here are the five best I’ve found.

The Nevis is the scariest bungee jump on the planet. You take a small cable car out to a suspended pod in between two massive mountains over a gorge, and then you’re at the mercy of the winds. This leap was one of the most harrowing experiences of my life.

You walk out across a metal grate bridge that you can see through, all the way to the rocksmore than 700 feet below. As if that’s not scary enough, you are then on the underbelly of a bridge with a vicious crosswind. As you inch up to the jump point, you fear your last view will be the horizon. Alas, you jump for eight seconds of free fall. When you survive, it’s the best feeling in the world.

This gained attention in January 2012 when a woman’s cord snapped mid-jump; miraculously, she survived. Since then, Zambia’s tourism minister has focused on safety here (even trying the activity himself). Apart from the hoopla, this bungee, flanked by stunning Victoria Falls, is nevertheless the most spectacular in the world. Jumping over the Zambezi River is a thrill as tourists ooh and aah a few feet behind you.

The Last Resort is a cliff-top adventure resort on a gorge above the Bhote Kosi River. In addition to activities including mountain biking and rafting, there is of course a bungeer jump here…from a pedestrian bridge over a sliver of a canyon. Shanty houses dot the edge of the cliffs, and so the locals watch you dive. It is a very scary jump.

The Taupo bungee isn’t the highest, but it is one of the best because you can get dunked into the freezing water below. You can actually stipulate how deep you want to be dunked and that staff, using your weight, figures out how to get you to that point. After you reach your deepest spot underwater, you’re ripped back up into the sky, as disorientation from taking in water goes through your body. It’s a really wild jump! 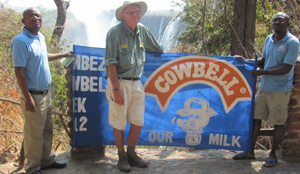