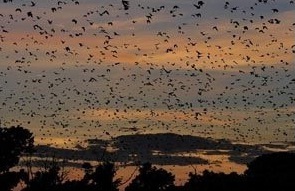 From: The Livingstone Weekly  by Jill Staden

As the Musuka and Waterberry trees of the region begin to fruit, up to 10 million straw colored fruit bats make their way from the DRC to this one particular patch in Zambia. This is a key wildlife event and when in full swing, provides the highest mammal concentration in Africa, probably the highest concentration of mammalian biomass in the world.

Let’s break this down into something that may put it all into perspective for you. Each bat weighs little over 1/2 of one pound and as numbers  reach up to 10 million this would equate to 5 million pounds. Now for the scary part – elephants weigh approximately 7,700 pounds so this is the equivalent of 649 elephants flying around! All I can say is “poor trees” as the bats all come in to roost! This year the first bat arrived on 27th September, two days later there were 6 and by 1st October numbers had reached 2,500. This was an early arrival from the norm by two weeks. However, yesterday they had all disappeared. Anyone seen 2,500 bats? … 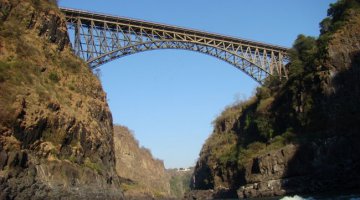 Top 10 bridges around the world