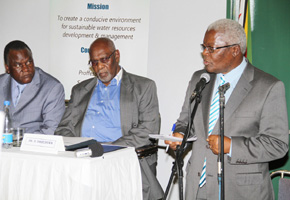 THE $1,2 billion National Matabeleland Zambezi Water Project (NMZWP), which has been on the cards for 100 years, is set to be completed in three years following the coming on board of the Chinese government.

The Chinese would provide the $1,2 billion needed to carry out the project, viewed as the permanent solution to Bulawayo’s water problems. An agricultural greenbelt expected to positively change the economic face of the country is also set to be created along the pipeline, from the Zambezi River to Bulawayo.

Speaking at the unveiling ceremony of the project’s advisory councillors at a Bulawayo hotel yesterday, the Minister of Water Resources, Management and Development, Samuel Sipepa Nkomo, said contractors had been asked to go back on site, as work would soon commence.

“One of our contractors, China International Water and Electric, has since been instructed to move on site. The $8 million allocated by Treasury in the 2012 budget will be channelled towards site re-establishment costs,” said Minister Nkomo.

He said the Chinese would this year allocate an additional $345 million in their budget to complete the project. Minister Nkomo said the money was a loan that constituted “cheap money” as it would be paid back over 25 years at an interest rate of about three percent. He said the project would be done in three phases.

“The third and final phase will be the construction of a 245km pipeline from the Zambezi River to the Gwayi-Shangani Dam,” he said. The Minister re-affirmed Government’s commitment to the successful and speedy completion of the NMZWP.

“We are alive to the water crisis in Matabeleland, particularly here in Bulawayo where water shedding is imminent, with two dams, Inyankuni and Umzingwane on the brink of being decommissioned,” said Minister Nkomo.

“The NMZWP is a large-scale and extensive engineering project whose completion may take up to three years. It is in this light that we are fast concluding the Mtshabezi Dam pipeline project so as to bring it on board soonest as a short to medium term measure.”

He said his ministry; ministries of Mines and Mining Development and Local Government, Rural and Urban Development had agreed that there would be no mining activities at the Gwayi-Shangani Dam site, as that would pollute the water.

His remarks come after companies that include Liberation Mining Company were reportedly granted licences to mine coal at the site. The Governor and Resident Minister of Matabeleland South, Angeline Masuku, said the assistance rendered by the Chinese showed who the country’s true friends were.

“Government’s Look East Policy continues to bring fruits to the country. People from Matabeleland have waited for a very long time for this project and it is now finally coming to fruition,” said Governor Masuku.

Dr Dumiso Dabengwa, the chairperson of the Matabeleland Zambezi Water Trust, said it was a fulfilment of one of the dreams of the late Father Zimbabwe, Dr Joshua Nkomo. He said everyone who had worked on the project in the past 20 years was a hero.

Also speaking at the same occasion, the vice-chairperson of China Dalian Technical Group (CDIG), the contractor responsible for the pipeline, Mr Fan Hu, said the project would provide enough water for about two million people and all industrial activity in the region.

“It will take three years to complete. There would be enough water for two million people. We are looking at the establishment of a greenbelt along the pipeline on which we expect the economy of Matabeleland to be built. Significant growth of the national economy is also expected to result from the project,” said Mr Fan.

Summing up, the Minister of Local Government, Rural and Urban Development, Dr Ignatius Chombo, said the project united all political parties in a common cause to better the lives of the people of Matabeleland.

“We are all here because the project is bigger than any party. People’s appetites have been aroused countless times over the project. We hope we will not meet again to select another committee as we hope this will be the committee to deliver,” said Dr Chombo.

He said he felt the project was going to be even bigger than Chiadzwa diamonds in uplifting the lives of communities.

“The scope of the development that will be brought by the completion of the project is difficult to fathom.

“Local authorities must plan the activities that will take place along the canal. In my mind I am seeing a corridor of people growing crops, animal husbandry, residential infrastructure with modern tarred roads, sewer systems and shops. I also see a fruit growing industry complete with packag-ing and canning factories. Let us not wait to start planning when the water finally reaches Bulawayo,” said Dr Chombo.

Plans to draw water from the Zambezi were first mooted in 1912 but financial constraints have always hindered their implementation by successive governments.