Tracks of Giants : Farewell for now to Botswana

2 July 2012:  Earlier this morning we crossed back into Namibia at the Ngoma Bridge border post along the Caprivi Strip. It was a somewhat solemn walk over the impressive structure that spans the wide and lush floodplains of the Chobe River – not because being back in Namibia held any trepidation, but simply because the last month or so traversing the vast and wild northern regions of Botswana has been such an adventure in wilderness exploration and conservation.

Fortunately, we get a second stint in this magnificent country in about three weeks, when we re-enter at Pandamatenga on the Zimbabwean side after having crossed Hwange National Park. It’s a most welcome thought.

Our conservation documentation of Southern Africa’s wildlife, wilderness, and local communities expands daily.  In addition, we’re admittedly having an adventure!  Our time has been filled with fun and exciting escapades, some of them the adrenaline-flowing type –  along with the  serious documentation work along the way.

The last few days of the kayak leg ended in a multitude of magnificent elephant sightings – family herds or groups of bulls around almost every bend, and the further we progressed, thankfully less hippos and crocs. No matter how much time you have spent in the bush, a 3 to 4m croc slipping into the water ahead of your kayak or a pod of bobbing hippo heads on a bend I the river will always be ominous sights. These are of course awesome creatures in their own right. However, after trying to be considerate in mind and action as we shared  with them the Okavango, Selinda and Savute waterways for the last three weeks, the whole team ultimately awarded them  the ‘least favourite animals’ nomination!

Besides the wildlife sightings, which also included lion, leopard, hyena, buffalo, impala, warthog, tsessebe, giraffe, zebra, waterbuck and baboons, highlights of this leg included the privilege of being allowed to pass through such incredibly remote wilderness areas, the warm camaraderie around the evening campfire and the night-watch routine. Again, many thanks to John Sandenbergh and Jeff Gush from Kayaktive Adventure Safaris for getting us through unscathed, and to PJ Bestelink, our Giant on these sections, for taking almost a month out of his busy safari schedule to be with us – and to his wife Barney for holding the fort while he was away.

The end of the water heralded the start of our 120km plus walk through Chobe National Park, and then along the floodplains of the Chobe/Linyanti system. For this leg we were joined by Michael Chase and Kelly Landen from Elephants Without Borders (EWB), true giants of elephant and large herbivore conservation across the entire Kavango/Zambezi Transfrontier Park (KAZA) region.   They are doing some of the most significant research across the region and, unlike so many other projects, they have a focused and long term vision — vital ingredients for successful conservation. We were also joined by James Brundige, an award-winning wildlife film-maker from Colorado, USA, and Marguerite Macdonald, a generous donor to TRACKS and a great friend to Ian and Sharon McCallum. Much to Ian’s delight, Sharon also took time off from her  immense logistical task to join us.  She  now goes  back to her TRACKS planning rosters in Cape Town. Sharon, a massive thank-you from everyone involved with the project for your invaluable work, and the diligent and patient way you go about keeping our legs, arms and wheels turning so efficiently. And lastly, the back-up crew has been energised and complemented by the arrival of Martin Peterson. By profession, Martin is a security consultant, and in his spare time, a long standing guide for the Wilderness Leadership School based out of Cape Town. His enthusiasm and skills around the cooking pots and general energy around the camp have been much appreciated, not to mention his wit and impromptu cabaret sketches that have become a much-anticipated after-dinner staple.

As already mentioned, we have also been hard at work, and both Ian and I sense it may be some of the best that will come out of the entire trip. The focus has been on the big-picture conservation and eco-tourism challenges of the region. Generally, and rightfully so, Botswana has a solid reputation within both these fields as a leader and innovator. For me, this trip has served to reinforce this in many ways. The combination of low impact tourism policies and keeping such large areas – almost 40% of the country – under some form of environmental protection gives this country the template to possibly become one of the best managed and most impressive wilderness regions on the continent in years to come. Indeed, it is a good case study for Nature Needs Half.  The government, conservationists, eco-tourism operators, communities and researchers and other policy-makers deserve huge recognition for this, and they must be encouraged to keep the vision.

They are also in the process of taking another step – the phasing out of consumptive utilization land-use options. Within the next two years,  with the exception of elephant quotas in some outlying marginal areas, all trophy hunting in the country will be stopped. There are many different opinions and research on this topic, and it is a hot-button issue across the region.  Personally, I am a firm supporter of non-consumptive options, or what is generally known as photographic ecotourism, as a more effective and sustainable way of managing wildlife resources.  I know that The WILD Foundation and The Wilderness Foundation, our partners in TRACKS, have a more integrated view of this issue.

My own reasons for supporting this phase-out are numerous. Most importantly, at a time when most countries (including Botswana) are losing large numbers of animals, more shooting does not make sense to me, particularly when the target may be the prime gene pool. Furthermore, some researchers are now aware of how disruptive continued hunting is on population patterns and dispersal behaviour of many species. Finally, if properly implemented, well-managed photographic ecotourism often provides a widespread and equitable sharing of benefits on various levels.

No matter one’s view on this contentious issue,  the end of trophy hunting in Botswana creates a new challenge for the government, large conservation agencies and the photographic sector– how to fill the void left in what will be the former hunting concessions.  Government will certainly have to step up their education and awareness programmes as to the nature and ramifications of this change in policy, and both the conservation groups and ecotourism companies will have to come up with viable models for best utilizing these areas. This group of stakeholders have a combined responsibility, even an obligation, to accept this challenge. In the long term, the financial viability of any business plan will depend on the ecological health of the greater region, and if this is not recognized, the risk is that in time, the ecological integrity of the prime areas will become compromised.

Botswana has not always had a sterling conservation record.  One blight is the construction of untold veterinary fences, forced on them in previous decades by the European Union in exchange for subsidized quotas of disease-free beef imports. With the falling-away of the subsidies, maybe it’s time for a panel of experts to re-examine the fencing alignment and to take down those that continue to block wildlife migration corridors. This will become more relevant as the plans for the KAZA TFCA progress.

Our time with Mike and Kelly from EWB again highlighted the importance  of opening wildlife migration corridors (www.elephantswithoutborders.org). The KAZA project is a grand plan to improve the ecological management of the more than 30 existing parks and reserves in Botswana, Zambia, Namibia, Angola, and Zimbabwe, as well as to include as much of the middle ground that lies between them.  This is being done by pooling wildlife and habitat resources for the benefit of all the governments, communities, ecotourism industries and visitors involved. For this vision to be fully realized, the free movement of wildlife is crucial, otherwise we will end up with a collection of shrinking, isolated and highly managed parks or reserves – and KAZA will fail. The research done by EWB clearly highlights where the corridors are – it is now time for policy-makers and planners at all levels to embrace this information and make these corridors a reality. Not only will this facilitate wildlife movements, it will also play a significant role in reducing the human/animal conflict that is so prevalent in so many wilderness areas. How do we get the policy-makers at all levels to do this?  As Ian McCallum always says, “To understand wildlife corridors fully we also need to open up the corridors in our minds”.

Before leaving Botswana, more thanks are due. To Grant Woodrow and his fantastic staff at Wilderness Safaris for facilitating our trip down the Savute Channel and for the immensely generous way they hosted us at Dumatau and LTC – to Mike and Kelly from EWB for giving up their valuable research time, and for guiding us through the Chobe and Linyanti regions. And then to Dereck and Beverly Joubert from Selinda Game Reserve and Great Plains for endorsing and assisting with our entire Botswana journey and the support we got from Selinda Camp. Your contributions to TRACKS are truly appreciated.

This next leg, a short hop across the Caprivi Strip to Kutimo Mulilo and then on to Shesheke on the Zambian side of the mighty Zambezi River, sees us get acquainted again with the bicycles – but this time I am armed with a gel seat! And at Shesheke we again connect with John Sandenbergh who will guide us down the River as we kayak to Livingstone. 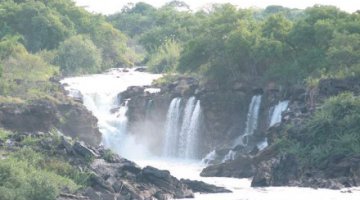