Dates for the UNWTO assembly

Exact Dates for the UNWTO General Assembly which will be held in Victoria Falls and Livingstone are 24th to the 30th August. ( There will be a 50 member delegation in situ from 1 month before the event )

Numbers for the actual event are expected to be in the region of 2500 to 4000 however this has not been confirmed.

We have been told by reliable sources that the border between the two venues ( between Zimbabwe and Zambia Victoria Falls ) will be allowing free movement throughout the event and in the days before and  after the event. This may be subject to individuals applying for event registration cards.

There will be an increase in flight access into this region before during and after the event and some of the delegates will be chartering planes from as far afield as China directly into the venue.

To cope with this increase in traffic the Victoria Falls Airport will have a fully completed 4.2 km runway and sections of a new terminal will be in use to allow the ease of handling of delegates. 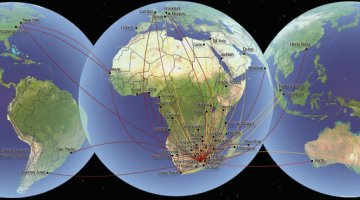