QQueen Victoria! Mists and majesty on a flight above Africa’s most breathtaking waterfall

Flying with the angels: Chris enjoys a fresh-air view of Victoria Falls by microlight

Taxiing across dirt tracks towards the runway, the pilot’s voice fizzles through my over-sized Top Gun earphones: ‘You ever been in a microlight before?’

‘No’, I shout, trying to make myself heard above the propeller revving a foot behind my head.

Pascal nods, swings us left onto the rough concrete that represents the take-off strip at Batoka Airport – if you can call this tiny site, pitched minutely on the banks of the Zambezi River, an airport – and gives the engine a burst of encouragement.

There is no laughter, and there is no reassurance.

Yes, he says calmly. This is his second flight.

And with that, Pascal opens the throttle, and we are airborne above the Zambezi.

He is joking. Everyone I have met in my two days in Zambia has a dry one-liner to throw the way of a tourist, and Pascal is no exception. He is a veteran of a thousand such flights and, to boot, a former Zimbabwean military pilot.

But any fear that might have been provoked by Pascal’s alleged inexperience is quickly displaced – and any anxiety at a maiden microlight flight forgotten – as we loop above the Mosi-oa-Tunya National Park and set course for Victoria Falls.

I am here to see the Falls at their most full and impressive – and a view from the air seems the best way to do it.

For at least 100,000 years Victoria Falls – the largest waterfall on the planet and, according to a recent poll, one of the seven natural wonders of the world – have been a constant, yet ever-changing, sentry at the heart of southern Africa.

From the wet season in April and May through to the driest months of November and December, the Falls – on the modern-day border of Zambia and Zimbabwe – are always in a process of metamorphosis.

So while they may have stood firm through the ruptures of the region’s social upheaval – from British colonisation to subsequent independence and the antics of Robert Mugabe – they are never really ever the same.

The rains begin in earnest in March, and for two months they pour down into the Zambezi. In doing so, these deluges help the river to accumulate such strength that, eventually, the surge of water reaches a power ten times the annual mean, leaving parts of the river impassable.

And the spray from the Falls can be seen from 30 miles away.

Once the rains relent, the river quietens and the Falls become so manageable that, by the height of the dry season, levels are low enough for guides to walk backpackers across the lip of the waterfall – before letting them swim in the Devil’s Pool, where rock barriers have formed a natural pond on the very edge of the abyss.

Goodness knows who first discovered this quirk of geography – and what they thinking as they took their quick dip.

I am here at the end of March – and a quick glance from my bucket seat behind Pascal proves that any attempt to swim near the full-strength Falls would be certain suicide.

A thousand feet up, we cut across the river from the north, Pascal using his expert knowledge to keep us out of the clouds, harnessing the wind to make better progress towards the Falls.

Even at this altitude, this grand landmark is visible as a tower of mist and steam. From a distance, this spectacle might resemble a forest fire or a slow-moving steam train – but it is this haze of condensation, hundreds of metres high, that gives Victoria Falls its traditional Kololo name: ‘Mosi-oa-Tunya’ – The Smoke That Thunders.

We track the Zambian side of the river, and spot an elephant herd relaxing among a clump of trees. They don’t even glance up at the thrum of our engine.

The wet season is the worst time of year for safari – the relatively lush vegetation making it harder to spot animals in the wild.

But from the air their protection is stripped away.

Within minutes, I see two giraffe happily gambolling near the grounds of my hotel, the Royal Livingstone. And then, moments later, five hippopotamuses basking in the Zambezi, only their eyes visible, poking out like two floating tennis balls above the muddy brown water.

Pascal says he has spotted a crocodile on an island, and we lurch in for a closer look, circling a few hundred feet above the river as he gesticulates toward some trees. I can’t see where he is pointing and, after two circuits, he eventually loses patience and we zoom off towards the Falls.

It is a sight to make a man feel very small indeed.

From the ground, it is impossible to appreciate the full scale of this 1.7km-wide, 110 metre-deep chasm, or the 500,000 litres of water that slip over its edge every second. The Falls are just too large and, particularly during the wet months, the spray just too thick, to gauge their true scale.

Some travellers have taken to purchasing visas and crossing the Victoria Falls Bridge to Zimbabwe, where the views are supposedly superior. More often, they take a water taxi to Livingstone Island and peer over the waterfall’s edge, or trek down to the bridge that crosses the plunge pool.

Here, under the spray-cloud, the Falls exist in their own micro-climate. In wet season, the water bounces back from the rocks below, soars upwards in a cloud, cools and unleashes the most ferocious of rain showers onto travellers’ heads. Ponchos are a must. And some walk it in their swimwear.

It all adds up to an unforgettable experience – but, unless you have wipers on your eyes, a pristine view of the Falls is difficult.

Of course, up in the air, above the spray, I can see the Falls in all their magnificence. We bank right and I can stare down into the plunge pool. The mist is thick and laced with rainbows, but occasionally it clears, and you can see the foaming water amid the rocks at the base.

Periodically we pass through a cloud, and all vision is obscured. The pilots call this the ‘Angel’s Kiss’, when the lungs are filled with sweet, moist air, and the glass of the visor becomes pocked with droplets of moisture. The microlight judders a little with the turbulence, but the fog quickly clears and I can make out the five different sections of the Falls, marked by a few brave islands standing against the force of the Zambezi.

On the Zimbabwean shore, to the west of the main chasm, lies the most ferocious section: the Devil’s Cataract. On the eastern shore is the Eastern Cataract, to its immediate west are the Horseshoe Falls and the Rainbow Falls.

In the centre I can see Livingstone Island, now looking so tiny and insignificant, where, in 1855, Dr David Livingstone became the first European to set eyes on Mosi-oa-Tunya, and named it after his monarch Queen Victoria.

Later he wrote: ‘It had never been seen before by European eyes; but scenes so lovely must have been gazed upon by angels in their flight.’

I would rarely describe myself as angelic – but having floated a thousand feet above Victoria Falls, I can almost say that I’ve flown with Livingstone’s angels. 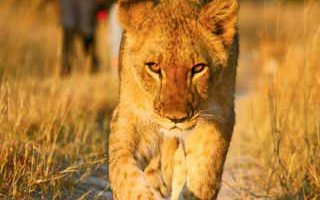 Lion Encounter update from the region