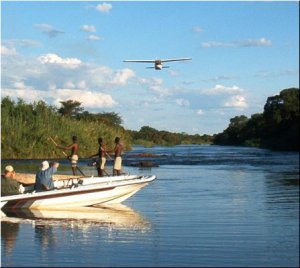 A Spokane couple doing missionary work in Africa were killed in a plane crash recently in Zambia.

Jay and Katrina Erickson had been in Zambia since February, working at a hospital on the Zambezi River about 400 miles upstream from Victoria Falls.

The Chitokoloki Mission Hospital said Jay Erickson was flying a six-seat Cessna on Saturday with his wife on board after transporting a nurse. The plane hit an electrical pole and crashed into the Zambezi River near the town of Zambezi.

The Spokesman-Review reported  the Ericksons will be buried at the mission.

Their daughters, 2-year-old Marina and 1-year-old Coral, had stayed behind at the hospital. Katrina Erickson’s parents, who live in Wisconsin, are preparing to travel to Zambia with Jay Erickson’s mother to reunite with their granddaughters, said Pastor Ron Ulmer of Hillyard Baptist Church on Monday.

The girls will be brought to Spokane, and the church will hold a memorial service for their parents in a few weeks, he said.

“They were living their dream and doing what they thought the Lord wanted them to do,” Ulmer said of the Ericksons.

The couple, both in their late 20s, met at Moody Bible Institute in Spokane and were married in 2008. They traveled to Zambia in late February to begin a yearlong mission to transport food, medical supplies, doctors and missionaries between the 150-bed mission hospital and other remote outposts.

Jay Erickson trained as an airplane mechanic and bush pilot at Moody Aviation, a branch of Moody Bible Institute.

Chitokoloki Mission Hospital issued a statement about the accident on its website: “We feel absolutely distraught and completely overwhelmed with sadness, agony and grief over this and so helpless that we could not do something more.”

The hospital said Jay Erickson had flown three passengers earlier in the day and that his wife joined him for another trip to transport a nurse. On their return the plane hit an electrical pylon and went into the river. It was Katrina Erickson’s first time flying with Jay since they arrived in Zambia, the hospital said.

The plane was submerged in the swift water and rescuers could not immediately reach it. The bodies were recovered Sunday with the help of Zambia air force divers.

Jay Erickson’s parents also were missionaries, and he spent some time with them in Africa as a child, Ulmer said. They now live in Seattle.