NGONIDZASHE Makusha — one of Zimbabwe’s brightest medal prospects at this year’s London Olympic Games — has all but been ruled out of the world’s biggest sporting showcase through injury. Long jumper Makusha, a bronze medallist at last year’s World Athletics Championships at Daegu, South Korea, is reported to have ruptured his Achilles tendon during training at his base in Florida, United States, and this might force him to pull out of Team Zimbabwe for the July 27 to August 12 London Olympic Games.

According to Makusha’s coach, Kenneth Harnden, the track and field star athlete late last week ruptured his Achilles tendon and underwent surgery at Tallahassee in Florida.

“Thankfully it is not his takeoff leg. Ngoni was doing drills that he does every week and (it was) just a freak accident.

“Yesterday (Tuesday) Ngoni underwent surgery here in Tallahassee with the two best foot and lower leg doctors available, the surgery was a success (and) he came out at 8pm on Tuesday night.

“Ngoni will rehab here in Tallahassee as well as with Achilles specialists in Canada and Belgium. Ngoni appreciates your thoughts and prayers during his journey back to world class athletics,” Harnden said in a message sent to the Zimbabwe Olympic Committee yesterday.

“ZOC received the news of Ngoni Makusha’s untimely injury with great sadness. The athlete may not be competing at theLondon Olympic Games due to the injury incurred but we are optimistic that he will fully recover over the next few months.

“ZOC remains supportive of the record breaking athlete who has brought great pride and honour to Zimbabwe.

“In this difficult time, when his preparation and prospects for London were bright and positive, we offer our best wishes for a speedy recovery to ‘The Mandedza Express’,” Mguni said.

Makusha was among seven Zimbabwean athletes who had already qualified for this year’s London Olympic Games and was heavily tipped to win the country a medal in his favourite long jump event.

In his debut appearance at the Olympic Games in Beijing, China, four years ago, Makusha missed a bronze medal by a whisker, coming fourth overall in the men’s long jump event.

And hopes were high that the talented track and field star would go one better and claim one of the three podium places at this year’s Olympic Games in London.

But this has all but been blown up sky high following Makusha’s injury during training in the United States late last week. 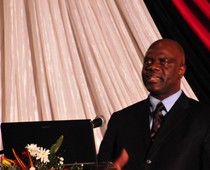