Unwto conference development in Vic Falls – set to benefit all

It is becoming very evident that Victoria Falls is the town that both leisure and business travellers are talking about and it is certainly one of the top destinations in Southern Africa at the moment. Victoria Falls experienced the highest number of visitors in several years in 2011 and it looks like 2012 is shaping up to be an even better year for the tourist town. After a decade of low arrivals, Zimbabwe is seeing a huge growth in tourists to the country and the famous Victoria Falls is most certainly seeing this obvious increase in interest.

But why is this town in land locked Zimbabwe such a popular destination? Other than the obvious spectacular Victoria Falls (one of the Seven Natural Wonders of the World) it is also the adventure capital of Africa, continually offering new and exciting activities. Furthermore, it is situated in the centre of a number of world class national parks in Zimbabwe, Botswana, Zambia and Namibia, meaning it is increasingly obvious that the tourist town is the ideal destination for travellers to pass through for a few days, before moving on to explore the surrounding areas.

However, the increase in arrivals that industry players are now preparing for can be attributed to a number of other positive factors.

The Victoria Falls Airport is being modernised and enlarged and a number of international airlines are discussing possible flights into Zimbabwe and the town itself. This is in addition to the recent commencement of Emirates flights into Harare from Dubai, via Lusaka. South African Airways has also dramatically increased its capacity to Zimbabwe by 66%, while Air Namibia has launched a four-times a week schedule from Windhoek to Harare.

Meanwhile the town has become the destination of choice for conferences with the African Travel Association (ATA) hosting their 37th world congress from 18 – 22 May this year, which saw 500 delegates descend upon the town. This is just the preview to what is expected in 2013, when the United Nations World Tourism Organisation (UNWTO) General Assembly is hosted in both Victoria Falls and Livingstone, with an estimated 3000 delegates from 158 countries expected to attend.

The General Assembly can only mean positive things for the town and Go to Victoria Falls members are extremely excited about how it will impact arrivals into the town.

Roddy Meiring, General Manager of Ilala Lodge says “It’s a unique opportunity which will further develop the town, once again proving that Zimbabwe is back on the map and a safe place to visit”.

Trish Mambinge, General Manager of Sales and Marketing for Shearwater Victoria Falls, added that “UNWTO means we shall see more arrivals next year, meaning we will take on more pax on our activities, gaining increased experience and revenue”.

Meanwhile the new luxury Victoria Falls Safari Club 20-room wing at Victoria Falls Safari Lodge looks set to be THE showcase accommodation at next year’s assembly. This exclusive facility, including four majestic suites, will open in August this year, a year ahead of the global summit, and construction is well underway.

Furthermore, the government is planning to build a new conference centre as preparation, which will not only go a long way in accommodating the few thousand delegates in 2013, but will also cement Victoria Falls’ reputation as a world class conferencing destination.

So with a number of exciting new developments for the town, as well as a more positive attitude towards Zimbabwe as a whole, it’s no wonder the Go to Victoria Falls members are expecting occupancies in 2012 and 2013 to surge, and for the increased interest to result in even further infrastructural developments.

Next post Lake Harvest to create 1 300 jobs in Kariba 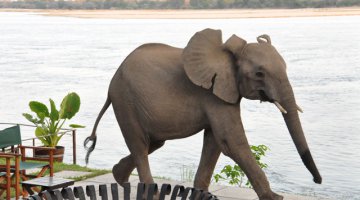