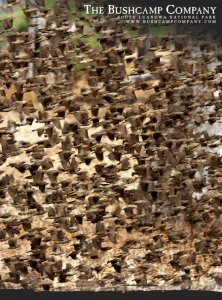 Did You Know… the red-billed quelea, common in South Luangwa, is also the world’s most numerous wild bird? Resident in sub-Saharan Africa, it is thought that their numbers may exceed 1.5 billion breeding birds. They live in huge flocks which can take up to 5 hours to fly past!

Technically, the domestic chicken is the most common bird in the world with a population of around 50 billion!