The destruction of the submerged trees continues around Antelope. On the 26th of April at about 4:30 pm a visiting fisherman and three buddies witnessed at least 1 kapenta boat tie up onto 2 submerged stumps and use the boat to bring them down. This wood was then loaded onto the boat. The three kapenta boat crews then went onto the shore and collected fire wood. The visiting fisherman did try and get them to stop but were ignored.Large numbers of kapenta boats are still parking on the Antelope and Zebra island shores (opposite Nyanyana Parks HQ) and crews are going on shore and are destroying the habitat by removing timber-dead or growing and using the place as a toilet-and possibly laying/checking snares. Parks now have a revamped boat-work to it was done by KAWFT. We hope it will be put to good use and they put a stop to all the illegal activites going on at Antelope and Zebra.

House boat captains are still sending their staff out in tender boats to collect fire wood. A tender boat by the name of Lightning was seen to park on the “sand spit” on the south western side. The skipper then took a walk well into the tree line and disappeared from view. He returned 10 minutes later empty handed.

On his return to the shore line he indicated to his mate that they could start collecting firewood. They collected a good haul of wood and then went west then north into the gap then east into the first bay. There was a huge house boat parked there. This happened in the late afternoon.

Antelope and Zebra Island need all the nutrition it can get to support the wild life they carry. Rotting timber helps in this regard. The free standing timber house colonies of bats and insects and is also home to several species of birds and provide anchors for tourists and local fisherman. Part of the beauty of Kariba is it’s submerged trees and soon they will be gone leaving desolate shore lines instead.

Next post Help us find the cheetahs of Zimbabwe! 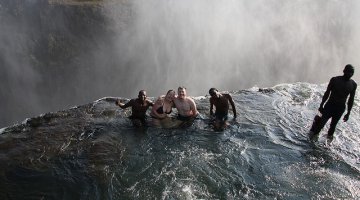