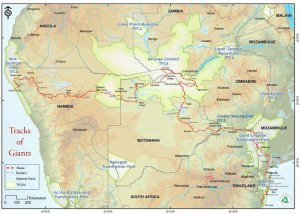 Two intrepid conservationists, together with a dedicated support team, will begin a 5000 kilometre, 20 week journey through six countries to help raise awareness of the importance of transfrontier conservation in Africa on Tuesday, May 1.

Internationally renowned conservationist, Garth Owen Smith, and president of the WILD Foundation, Vance Martin will be on hand to see them depart. Martin will also be joining the team for the first four days of the expedition.
The Tracks of Giants expedition kicks off on the Atlantic coast of Southern Africa in Namibia on Tuesday, May 1, 2012 and will see the team transverse Southern Africa to finish their journey on the east coast in KwaZulu Natal on 5 September, 2012. Conservationists, Ian McCallum and Ian Michler will be doing the entire journey without the use of mechanical transportation.

“We will be travelling on foot, using mountain bikes, mekoro’s (traditional dugout canoes) and kayaks,” says Ian McCallum. This will emphasise the connection and interdependency that man has with nature from a grassroots perspective. “The route that we are taking follows ancient elephant clusters and migration routes through six countries including Namibia, Botswana, Zambia, Zimbabwe, Mozambique and South Africa.”

Ancient migration routes of elephants were chosen as the general route indicators as elephants are a keystone species and play a vital ecological, social and economic role in many Southern African countries as they anchor conservation initiatives and attract tourists to protected areas.

Tracks of Giants is a project of the Wilderness Foundation and The WILD Foundation, and supported by Avis and other sponsors.

“There is a need to increase awareness about the effects of climate change in the region, and what comes with it – human health and displacement issues, deteriorating security, and decline in natural resource resiliency,” says Andrew Muir, CEO of the Wilderness Foundation.
Along the way, the conservationists will document the various successes and problems relevant to the human-animal interface, interact with local government, conservation agencies as well as the local ‘giants’ of conservation in each country.

“In order for us to build a sustainable future, we need to ensure that humans and animals can co-exist,” says Michler. “This journey will help to identify successful partnerships through various land-use options, and will also offer us insight into what doesn’t work. Through an effective public communications programme, the project will educate governments, conservation agencies, tourism entities and the general public about building a mutually beneficial, sustainable relationship with their natural heritage.”

The Tracks of Giants expedition will explore various models that include ecological thinking and implementation, bridging the gap between the needs of humans, wildlife, and the changing environment.

National Geographic is a digital media partner and will document the trip via extensive coverage on multiple digital platforms. The trip will also be closely monitored on dedicated social media sites, all drawing from the TRACKS Media Centre (www.tracksofgiants.org). 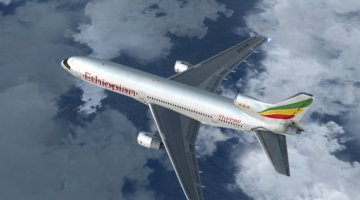