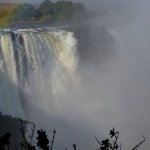 A WEEK-LONG search for a missing tourist has been called off in the Victoria Falls Rainforest, but police say the investigation will remain live.

Tinashe Chitambo, 25, disappeared on a visit to the falls on March 25. He was travelling with his sister, Michelle.

The pair took a brief tour of the densely-wooded Rainforest on the banks of the Zambezi River at 10AM before breaking off for lunch at the Shearwater Restaurant.

The Parks and Wildlife Management Authority, which is in charge of the Rainforest, says Tinashe went back for a solo tour and never re-emerged.

Michelle raised the alarm around 2PM after failing to hear from her brother, sparking a desperate search which had not yielded anything by Friday.

At the start of the search, one witness had told rangers that he had seen a man loitering around the falls.

Parks spokeswoman Caroline Washaya-Moyo said Friday that they had scaled back the search and they now feared for Tinashe’s life.

“A full scale search has been suspended and at this point our rangers and the police have found no leads to explain Tinashe’s disappearance. It’s been a desperate search, but with every passing day hopes of finding him alive fade,” she said.

The missing man’s family insist he was not suicidal.
Victoria Falls police say the investigation will remain open and they will chase down all leads.
Tags: missing tourist in victoria falls zimbabwe