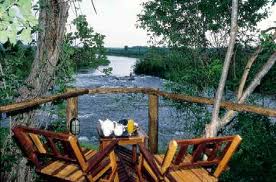 Impalila Island — The Impalila Island Lodge is perched almost on top of the Zambezi River with its stilted chalets hidden within the camouflaged embrace of mighty Baobabs and wild date palms.

So what can be better than to lounge on the open veranda, a steaming cup of coffee in hand and watching the sunrise.

Through the night, and now glinting silver in the early morning, one is continuously aware of the low swishing of the river and the deeper sound of the nearby Mambova Rapids.

Below them lies Kazungula, the end of the Caprivi Strip and a place where four countries meet – Namibia, Zambia, Botswana, Zimbabwe and Angola.

Lodge manager Hannes Vermeulen and his wife Kim told New Era during the two-day stay that they took charge of the running of the lodge since all activities are water-based birding, while angling is the mainstay of their income. The Island Lodge has eight rooms that can accommodate twenty-one persons at a time.

The lodge is fully operational and involved with the local community by making free provision of a quarter of its purified water production and to nearby villages and homesteads.

These social responsibility efforts are subsidised by the mother company ‘Islands of Africa’.

With a length of about 11 kilometers and 5 km wide, about 2700 people stay in 44 villages across the island. With names such as Kamabozu Village, which refers to ‘many Baobab trees’ in the Subia language as well as Sinkanka Village, which means ‘rapid waters’.

Many of these villagers work in the nearby lodges. On the island there is a combined school with 29 classrooms and 200 children, from pre-primary to secondary Grade10, a clinic with two doctors and a registered nurse.

Teacher Verona Liseli, one of the three female teachers out of the 11 staff members, says that six years ago, she completed a three-year teaching diploma at the Caprivi Unam Campus.

She is happy teaching on the island and the only problem she has, is that the Namibian Mobile Telecommunications Corporation (MTC) reception is overpowered by Botswana’s MASCOM, which is unreliable.

From the 2000-year old Baobab tree in the northern part of the island visitors can see the place where the borders of the four countries meet and tourists can climb the tree and see parts of the five countries.

And to top it off, Namibia’s second five-star hotel, the Ntwala Island Lodge, with its white sands and palm trees adds to the visitor’s choices and seems to belie that fact that the lodge is in Africa.

Ntwala lies at the end of the confluence of the mighty Chobe and Zambezi Rivers. It consists of four ultra-luxurious styled suites artfully appointed, each including a private pool, fringed by white sand and an opulent viewing deck. The bath is inside with an outside shower.

The Vermeulen couple, their son and their guides, a chef and cleaners do their best to make a stay as pleasant as possible. They guarantee peace of mind, a good rest or a chance at either excitement or just relaxation.