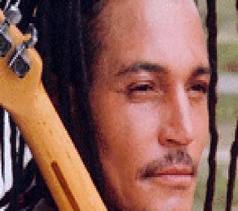 Andy Brown the bright Zimbabwe star of African Vibe and Rock has passed away.

His music lit up the lives of so many around the world but especially won the heart and souls of Zimbabweans and people in the region of Victoria Falls, Zambia and Botswana.

Born in 1962, like many other Zimbabweans Andy grew up in rural Zimbabwe and only moved to the big city to pursue an education. While in Bulawayo, he created his first band, Impact. A later move to the capital, Harare, would see him work with many different bands, including Grabb and the Rusike Brothers.

Andy joined the band Ilanga in 1986. Fronted by singer Comrade Chinx, Andy played lead guitar. Ilanga had a successful life-span, producing two albums, 1987’s Silver and Gold, and 1988’s Visions Untold. Their crowning achievement came when they graced the stage alongside Tracy Chapman, Bruce Springsteen, Peter Gabriel, the Bhundu Boys, and Youssou N’Dour at the 1988 Human Rights Concert in Harare. Although both Andy and Chinx left the band in 1989, Ilanga continued to record, releasing a solitary album under songtress Busi Ncube.

After leaving Ilanga in 1989, Andy pursued a solo career. He formed Andy Brown and the Storm. The band has been performing and recording together for the last 13 years. Their popularity has grown in Zimbabwe, and have risen to become one of the country’s top acts. The Storm’s music doesn’t fit a certain category; songs include a variety of instruments, from the standard guitar-bass-drums of a rock act, to horns, and the traditional mbira. The band has also toured abroad. Andy latest release, Hondo Ye Sadza, was recorded in Germany and the Ivory Coast.

Andy leaves Chiwoniso Maraire, a female Zimbabwean singer. They have one child.

Victoria Falls 24 sends condolences from the region and thanks Andy for all of his amazing inspiration..