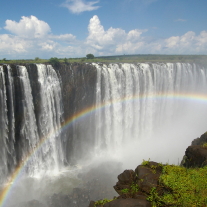 From : 1timeholidays.co.za
20 March 2012
Check out all our holiday offers in Victoria Falls – prices from R3 483 per person sharing

The quaint Victoria Falls town – just ten minutes from the Falls, and on the outskirts of the game-rich Zambezi National Park – is a bustling hive of activity, with all the amenities necessary to act as a base for exploring the region. The Victoria Falls and the surrounding rainforest are persevered as a 23.4 kilometre National Park and form one of Zimbabwe’s four World Heritage sites.

USEFUL INFORMATION
Victoria Falls is two hours ahead of GMT and therefore on the same time zone as South Africa. Zimbabwe’s currency is currently in United States Dollars with Rand and Pula also accepted. Most of the top hotels will take credit cards (Visa and Master), it is advisable to travel with cash. Generally shops are open from 8 am to 5pm Monday to Friday. 8 am to 12pm Saturday. Government departments close on Saturdays. Passports must be valid for at least 6 months from the date of arrival in Zimbabwe, passengers must be in possession of onward or return tickets and sufficient funds.
Different times of the year will provide completely different experiences of the Falls region. Peak flood season is around March and April and the full power of the falls can be experienced in all its glory. But due to the masses of spray rising from the water the full width of the Falls cannot be seen on foot. The aerial view at this time however is spectacular. The view of the falls gets better and better through the year, but at it’s lowest, around November and December the Falls become little rivulets running over the edge and in some places along the 1,7km width no water falls at all. This season’s gift is the view of the impressive cliffs that form the Falls wall and the magnitude of the abyss can be fully appreciated.

ATTRACTIONS
The Victoria Falls Museum, and the Mosi O Tunya National Park are worth seeing – who can forget the local craft markets – where the curios are locally made and crafted with meticulous artistry.
Batoka Gorge: A world heritage site, with its steep cliffs, churning deep waters and abundant birdlife, the Batoka gorge is a spectacular site. Forming the border between Zambia and Zimbabwe, the gorge is too steep for much animal life, but birdlife is abundant with one of the most concentrated populations of avian raptors in the world, including the rare, African Taita Falcon.
Zambezi National Park: Six kilometres from Victoria Falls, the Zambezi National Park, wild with bush and big game, stretches along the river for 40 kilometres. The National Park lodges here are set on the river amongst Ilala palms and wallowing hippos. They afford leisurely views of the sundowner cruises which paddle the calm waters above the falls.
Victoria Falls, The Falls: Victoria Falls is a world famous waterfall; view Victoria Falls from the side of Zimbabwe to see the most magnificent views of this giant world wonder. Victoria Falls is located within a National Park allowing for game viewing and as well as Victoria Falls tours.
Activities: The falls offer a wide range of activities for the adventorous and also the less adventorous. Popular activities include: White water rafting; Canoeing; Bungi jumping; Gorge swing; Elephant back safaris and interaction; Helicopter flips over the Falls; Microlite; Game drives and River cruises. Steam train journeys
CLIMATE
Zimbabwe enjoys a daily average sunshine ranging from four to ten hours all year round. Generally, the days are bright and sunny, the nights clear and cool.
November to April is summer months (rain season) while winter is from May to July, with generally dry weather. The period August to October is very hot and dry. Both temperature and rainfall are directly influenced by altitude.
In the lowveld summer temperature can soar to over 35º C compared with the highveld’s average 25º C to 35º C, Daytime winter temperatures average 13º C to 20º C but can fall to -5º C at night.
Tags: 1time airlinestravel packages to Victoria Falls 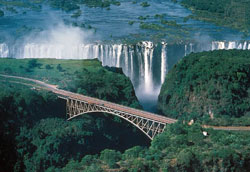