VF24 would like to congratulate the Zambian soccer team and all of the people of Zambia for their incredible success in the Afcon.. we look forward to many more 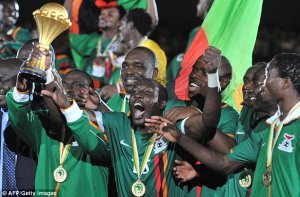 DELIRIOUS Zambia fans broke into unprecedented celebrations across the country, partying hard all night to savour the glory as Zambia won the soccer Africa Cup in Gabon last night.

The country erupted into wild celebrations following the Chipolopolo’s nail-biting final 8-7 win on penalties against the Elephants, with multitudes pouring onto the streets, setting off fireworks and causing traffic jams.

Vehicles drove around with Zambian flags fluttering and vuvuzelas blaring. The picture was the same across the nation that gathered anywhere where a television or radio was on, donning their replica shirts, daubing themselves in the national colours.

And as soon as the final whistle was blown by Senegalese referee Badara Diatta fans spontaneously hugged their neighbours and friends as they celebrated Zambia’s first ever Africa Cup. The party was on.

The country, which had never won this most cherished of titles, has made soccer its national game and was certain that this year, finally, it will capture Africa’s ultimate prize, the Africa Cup.

A Ndola taxi driver, who had declared a day’s fast, told his morning passengers: “We are winning, and I am not going to eat anything until after the match.”

In Kabwe, there was a combination of anxiety and happiness as scores of residents clad in national colours watched the Chipolopolo take on the dreadedeIvory Coast.

But the anxiety turned into joy after Zambia emerged victorious, with residents celebrating in style with others kneeling and thanking God for the victory while other threw themselves on the floor in celebrations.

In Lusaka, fans went agog as Sunza converted the last penalty, with Multichoice public relations manager Marlon Kananda failing to resist to join in the dance at 365 Pub in Chilenje.

Kananda said Zambia had now shown the continent even local players could equally put up a strong challenge and win the cup.

In Livingstone, several residents and motorists stormed the town centre from various parts of the city to celebrate the Chipolopolo’s victory against the Elephants.

The residents and motorists danced, hooted, whistled, and blew their trumpets commonly known as vuvuzelas while others set up fireworks in town along Moti-oa-tunya road where the main celebrations took place.

Police officers blocked the junction of Mosi-oa-tunya and Akapelwa roads to control motorists but chanting fans passed through the blockade and kept on chanting as they celebrated Zambia victory.

Some youthful men and women removed their top attire as they danced and sang songs in solidarity of the national team and the country at large.

And Earlier in the day, hundreds of Zimbabwean soccer fans stormed Livingstone, joining their Zambian counterparts in giving solidarity to the Chipolopolo ahead of the AFCON 2012 final.

The fans, who came from different towns in Zimbabwe such as Victoria Falls, Hwange and Bulawayo, made a triumphant entry through Victoria Falls border post around 16:00 hours chanting Let’s Go Zambia, Let’s Go Chipolopolo.

The fans’ representative, George Chivhunga said group’s support for the Chipolopolo was because Zimbabweans and Zambians were one people.

Chivhunga said when Zambia beat pre-tournament favourites Ghana 1-0 to qualify for the finals, a named prominent resort in that country offered free beer as well as other services at no cost.

“The situation in most of Zimbabwe including Harare and Bulawayo was celebratory in support of the Zambia national team. A win for Zambia is a win for Southern Africa,” he said.

And ZANIS reports that soccer fans in Laupula Province were left fuming at Zesco after a power failure as the game went into extra time and subsequent penalities, but they were happy thereafter.

And Arsenal and Netherlands striker Robin van Persie tweets: “Great final Zambia-Ivory Coast and what a great penalty shoot out it was. I’ve seen some great penalties under tremendous circumstances! 1/2”

Fabregas tweeted “Feeling really bad for Gervinho and Kolo. The line in so thin between winning and losing. Congratulation to Zambia. Well deserved!”

Next post Fraser Mackenzie – 2011 Head Boy from St Georges College has qualified to Row in the 2012 Olympic Games in London! 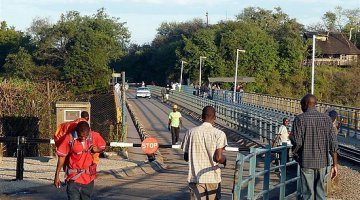