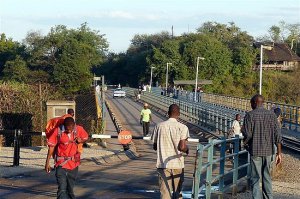 Zambian side of the Victoria Falls Bridge

And Ministry of Finance and National Planning Deputy Minister Alfreda Kansembe has said it is the intention of the Patriotic Front (PF) Government to improve infrastructure at all border posts countrywide.

Mr Zulu said ZRA Victoria Falls Border Post was currently collecting average revenue of K6.5 billion per month which was one per cent above the IMF targets.

His office was trying to be efficient in the clearance of goods and ensure that goods reached their destination on time.

Mr Zulu was speaking in Livingstone yesterday when Ms Kansembe and her delegation from the Ministry visited ZRA Victoria Falls Border Post.

He said some of the challenges at the border post included inadequate staffing, deplorable furniture, poor lighting, poor wire fence, lack of adequate office space and the absence of banking facilities and open shelter, among others.

Mr Zulu said the border post only had 14 technical staff , which exerted a lot of pressure on the existing inadequate workforce as the border was opening from 06.00hrs and closing around 22.00hours

He said the wire fence should be worked on as a lot of smuggling was taking place due to the porous fence.

Mr Zulu said due to the absence of office space, institutions like the Drug Enforcement Commission (DEC) and the Ministry of Agriculture and Cooperatives were not accommodated at the border.

In response, Ms Kansembe said it was her Government’s intention to improve infrastructure in all border posts.

Ms Kansembe noted that most infrastructure in border posts were dilapidated and inadequate, hence the Government would address that problem.

She said banking facilities at Victoria Falls border posts were needed so that passengers and tourists could carry out their transactions through Automated Teller Machines (ATMs).

On low staffing, Ms Kansembe said ZRA had been allowed to employ at least 1, 200 workers this year, though the number was not enough.

She said after the tour of border facilities throughout the country, she would prepare a comprehensive report and submit it to the ZRA commissioner general and other stakeholders so that it is acted upon.

And Ministry of Finance and National Planning assistant director for national policy and implementation department Hibeene Mwiinga said ZRA officers should be motivated so that they did not engage in corruption.

Next post One metre from death: a dip in the world's most spectacular pool 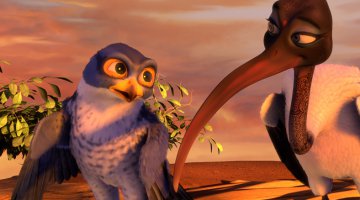