The Victoria Falls in Zimbabwe is one of the seven natural wonders of the world and have been designated a World Heritage Site, under the UNESCO World Heritage Convention. The falls are surrounded by the 2 340 ha Victoria Falls National Park and the 57 000 ha Zambezi National Park. These state-protected areas are home to numerous species of fauna and flora, which, through recent times have unfortunately been subject to a dramatic increase in various forms of poaching.

Charles Brightman, a local safari operator and conservationist, together with the Victoria Falls Safari Lodge, established the Victoria Falls Anti-Poaching Unit in January 1999, in an effort to fight the alarming levels of destruction that was taking place. Since this time, VFAPU has worked in close co-operation with the National Parks and Wildlife Management Authority and the Zimbabwe Republic Police, to achieve many successes.

VFAPU is under no illusion that we will completely stop poaching but with the support of various stakeholders, companies, hotels, lodges and individuals we have been able to achieve great successes to date. Since the unit’s establishment, we have removed over 20 000 wire snares from our operational area and have arrested over 560 hardened poachers. VFAPU has been able to rescue over 150 mammals injured through poaching and released them back into the wild.

We need your help to conserve our precious wildlife – VFAPU has set up a “SPONSOR A SCOUT” appeal and is looking for corporate sponsorship to meet the salary of a Game Scout each month, which is currently set at $285.00 per scout per month.

Why sponsor a scout?

· A company can use the VFAPU logo on all their correspondence, thus advertising their support for a worthy cause

· Play your part in fighting the crime of wildlife poaching

· IN ADDITION – SHOULD A COMPANY SPONSOR A SCOUT PER MONTH FOR TWELVE MONTHS, THE FOLLOWING PACKAGE WILL BE OFFERED TO TWO PEOPLE FROM THAT COMPANY:

AND A HELICOPTER FLIGHT OVER THE FALLS!!!

PLEASE HELP US TO STOP THIS! – Please email Charles Brightman at cat@yoafrica.com to find out how you can sponsor a Game Scout. 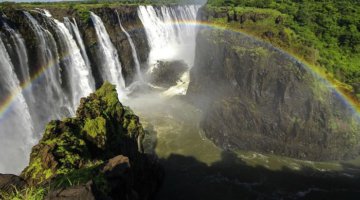 Tourism Operators allowed back into the Falls