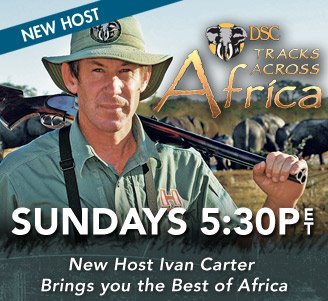 Ivan Carter is widely recognized on both a national and international level as one of the most respected Professional Hunters, television personalities and African wildlife authorities in the outdoor industry.

Born in Southern Rhodesia (now Zimbabwe), Ivan’s passion for wildlife developed deep and lasting roots that continue to shape his professional, and personal life. As a Professional Hunter, Ivan holds a license in several African countries. He averages over 200 days a year guiding clients and filming for the Dallas Safari Club’s TRACKS ACROSS AFRICA television series.

Beginning January 1, 2012, Ivan will assume the position of show host of Tracks Across Africa, one of the longest running and most popular series on The Outdoor Channel.

The series, which features 26 new episodes per year, is dedicated to capturing the drama and adventure of the modern day Africa safari. With 97% of content dedicated to hunting Africa’s dangerous game, Ivan’s skill and vast experience with “The Big 5”, combined with his enthusiastic on air personality make him the perfect host for this series.

Ivan Carter is considered in both hunting and conservation circles one of the world’s foremost experts on the African elephant. His groundbreaking film, Boddington On Elephant with IVAN CARTER, is widely recognized, as the finest film of it’s kind dedicated entirely to the hunting, understanding, and conservation of this amazing creature. A popular speaker at trade shows and safari industry events, Ivan has lectured around the country at a diverse range of venues including Stanford University, all the while promoting sustainable wildlife utilization and the role of the hunter/conservationist.

Ivan is a partner in Safari Classics Productions, based in Dallas, Texas and currently resides in Michigan with his wife Ashleigh and their two children Trail, and Brooke.