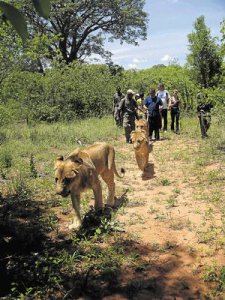 WALK AND STALK: A group strolls behind a trio of lions - with nothing but sticks for protection Picture: NADIA KAMIES

On a trip for her 20th wedding anniversary, Nadia Kamies has more fun than you can shake a stick at

We are walking behind three lions, one male and two females. We are quiet and not making any sudden moves. Actually, I am trying to not even breathe. “Hold onto the tail, if you want,” says one of the guides. “Are you serious?” I ask. “Yes, he won’t mind,” he says. I have a feel of the rough, prickly tail but then pass it to my son, who is much keener. I keep a watchful eye, though I am not sure what I would, or could, do if things got nasty. It seems like we are in a bizarre dream. Whose idea was this again?

We are following a hot, dusty path, each of us holding a stick. There are six of us – my husband and me plus two teenagers, our son and a cousin, and a young couple we have just met at the lodge. It’s a strong stick, cleaned up from one of the trees in the area, but still a stick. The guide handed them over, saying: “If the lion looks at you, just hold the stick in front of his face.”

The walk has been organised through Mukuni Big Five Safaris, which runs a conservation and breeding centre for the Zambia National Parks. They also do elephant-back safaris and cheetah interaction.

When the lions stop, we stop. When they decide it is time to rest under a tree, we do too. But this is our opportunity to come closer and take pictures. The guides do seem in control but there are precautions to be observed – no sudden movements or loud noises; if the lion gets up, move away; if he looks at you, shove your stick forward. They are still wild animals, after all.

As if this was not enough adrenaline, the previous day we had jumped into the Devil’s Pool on the edge of the Victoria Falls. We had swum across the Zambezi, zigzagging behind the guide, to avoid being swept away by the current. We had left our clothes behind on the riverbank and handed our cameras to the guide, who carried them high above his head in a waterproof bag.

The guide was very reassuring. “As long as you can swim well, you’ll be fine,” he said. “I am sure there is a good reason for that name, though,” I thought .

We clambered over some rocks to get to the pool and were given the choice of sliding down into it or taking a jump. It was our 20th wedding anniversary, and it seemed something momentous was required. So I jumped! The guide was ready with our cameras to record the moment. My son had soared into the air and managed to hover there long enough for a perfect photo. My husband and I, being somewhat less adept at soaring, made it into the bottom right-hand corner of our shots.

After almost half a century of living south of Victoria Falls, I had finally made it there – and it did not disappoint. Even though we were there at the beginning of the rainy season (December) and the falls were not full, they were awe-inspiring. We took a cruise down the Zambezi, a helicopter flip over the falls, as well as a trip to the Zimbabwe side, for an even more spectacular view.

It being a special occasion, we stayed at the Royal Livingstone, which is as good as it gets – in full view of “the smoke that thunders”. Every time we looked out our window, some species of wildlife just happened to be wandering by – zebra, giraffe and monkeys.

Besides the encounter with the lions, we went for elephant rides (rather uncomfortable); played with lion and cheetah cubs; and my husband took the kids quad-biking and to the crocodile park. In four days we managed to pack in a lot of travel – and there was still much more that my son would have liked to do. Like the slide across the falls, which I think can wait until next time . perhaps when he is old enough to go on his own and I don’t have to witness it. 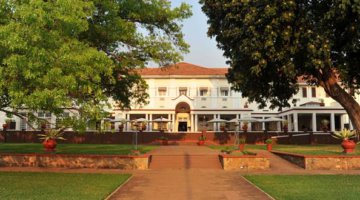