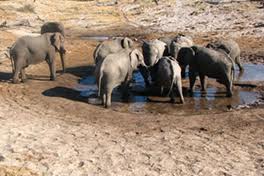 Elephant at ever decreasing waterhole

Severe drought has killed an estimated 100 elephants worth $2 million in Hwange National Park in the past month or so, and is threatening thousands other jumbos in the country’s largest wildlife sanctuary.

Elephants are the mainstay of Zimbabwe’s tourism industry and each beast is valued at $20 000, according to Statutory Instrument 9 of 2009.

Parks rangers, have since the heat wave that swept the country in late October reported alarming death rates, especially in calves and old jumbos, who have had to endure the long distances to the various artificial drinking holes.

Asked for comment Parks director general Vitalis Chadenga said his organisation was doing its best, even with limited resources to artificially supply water.

Tags: drought in zimbabawewildlife in zimbabwe 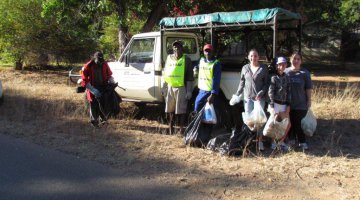