Grown-up gappers: the most exhilarating time of our lives

In the latest dispatch on his round-the-world trip, Matthew Lewin tells how he and his wife, Vivienne, have been enjoying high adventure – and coping with higher-than-expected bills.

There were those, ourselves included, who were worried that we were a bit too old and infirm at 67 and 70 to undertake a demanding six-month, round-the-world journey taking in 10 countries, involving 20 flights and packing and unpacking for 39 hotels.

Well, the doubters should have seen us last week at the Victoria Falls where we two old codgers had one of the most exhilarating experiences of our lives – literally hanging over the edge of the falls.

We had gone by boat to Livingstone Island, from where the great missionary and explorer first saw the famous waterfall – Mosi-ao-Tunya (the smoke that thunders). Had we known what was to happen next we would have stayed in the hotel, hiding under the bed. Instead, we were persuaded to swim out across the current to a rocky outcrop near the edge of the Main Falls, and from there to slide into water aptly dubbed the Devil’s Pool and swim to a ledge at the very edge of the falls.

It was terrifying and euphoric to look down more than 300ft to the amazing turbulence below, with water rushing past and disappearing down into the void. At one point the guides had to hang on to our legs to make sure we wouldn’t be washed over the edge.

This experience is only possible, when the water is low in late September and October and the flow per second is a mere 7,000 cubic metres, instead of the usual 12,000 cubic metres (50 million litres). It reminded us of how good it feels to be alive.

Our visit to this part of the world coincided with a sharp rise in temperature. It was 48C (118F) when we drifted down the mighty Zambezi on an inflatable boat, but we took it in our stride.

That said, health-wise, it hasn’t all been plain sailing. During our stay in Plettenberg Bay, my legs started swelling up owing to a recurrence of a thyroid problem. It necessitated four visits to a doctor and a series of blood tests – all of which had to be paid for in cash (about £600, though I’m confident I will be able to claim on our insurance).

On top of that there was a problem with my knee – overstressed when I stupidly clambered down a little mountain in the Karoo in the Cape. For a while the pain was so excruciating that I envisaged hobbling about with a stick for the next four months and being unable to do much at all. Not at all what we had envisaged – but it never entered our heads to abandon our senior gap year.

With the aid of gentle exercise and long walks on the beach, the knee is no longer causing me grief and the thyroid hormone levels are properly balanced (although I will need further blood tests). I am feeling fit again and have even lost some weight. Vivienne, meanwhile, although older, has suffered nothing worse than a couple of colds.

In addition to concerns about our health, we also faced dire warnings about the dangers of the mean streets of Johannesburg, our next stop after the Cape. We both grew up in the city and know the basics of how to keep safe. There is no doubt that Jo’burg is a high-crime area – but in the mainly white northern suburbs, if you take sensible precautions, you feel quite safe. You don’t go to certain areas, you don’t walk at night, you lock your car doors, and you remain wary when arriving back after dark. And you pick your accommodation carefully. Our delightful b & b, Melrose Place, had a high wall, topped by an electrified fence, a huge electric gate – and a 24-hour security guard. Behind all that, we slept like babies.

The Cassandras forget that Jo’burg is also an exciting, vibrant African city with a compelling urban beat. It is also a beautiful city (it has more trees per square mile than any other in the world), and it is growing at such a rate that I, who thought I knew my way around, found it bewildering.

Our food and additional spending budgets (£50 a day for each) have taken a bit of a pounding. We did all right in Cape Town, in the fishing village of Paternoster and in Hermanus, where we watched whales. But when we reached the long self-catering section of the journey, in Plettenberg Bay, we were shocked at the food prices and made rather too many visits to restaurants.

Many excursions have been more expensive than expected. The waterfall experience cost £75 each (worth every penny); the Zambezi boat ride was about £50 each; a visit to Zimbabwe to see the falls from the other side came to almost £100 each.

But we have drawn in our horns, and are now determined to make up for those spendthrift days (or dig a little deeper into savings).

One of the other things we have learnt is that we brought far too much clothing with us (I have posted back more than 10kg/22lb of clothes), and that it is ridiculous to carry bags full of cosmetics, sunscreen, shampoo and the like around when everything can be bought locally.

We are only now getting the hang of living out of a suitcase. You can’t unpack completely if you are going to be somewhere just for a night or two, and we are slowly learning how to layer our cases, where to put the medicines, the dirty clothes (too many of which have been cleaned in hotel laundries rather than local launderettes).

But the adventure continues; after Johannesburg came the wild life of Kruger National Park; as I write this, we are at the beautiful St Lucia estuary on the coast of KwaZulul Natal.

Medical setbacks and slight frights notwithstanding, we remain undaunted. Actually, we are having the time of our lives. Australia, New Zealand and South America beckon… 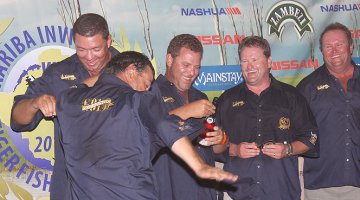