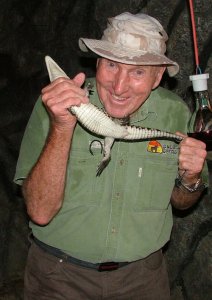 Joe, with a smaller version of the many man-eating crocs he has captured over the years (photos Lindy Nauta)

Half a teaspoon of crocodile fat a day and a strict gym routine keeps 84-year old Joe McGregor Brooks, owner of the Livingstone Crocodile Farm, enviably fit and healthy.

One of Livingstone’s living legends, Joe arrived in Livingstone in the early pioneer days in 1954, following a stint as a 15 year old ‘boy soldier’ and some time spent in Malysia in the British Army. Upon his return to the UK he met and married his Thai wife Sina, whom he brought out to the then Northern Rhodesia with their small son Ian once he had landed a job as a garage mechanic. They remained happily married for 53 years, until Sina’s death a few years ago.

After his arrival in Africa Joe was soon involved in the relocation of animals and villagers displaced by the vast Kariba Dam project which began in 1954. By trial and error Joe became an expert in hunting down problem animals who destroyed the livelyhood of villagers and killed people, in particular elephant and hippo. Although he cannot explain it he attributes escaping serious injury during his many close shaves with the wild animals to the spell put on his rifle and himself by the old wife of the Chief of Siatwinda, Dundu. Despite being chased by enraged elephants and hippo, mauled by a leopard and tipped into the crocodile-infested Zambezi he survived unscathed in all the years he was involved in game control.

Later in life Joe specialised in hunting down man-eating crocs and instead of killing them, he placed them at a special crocodile enclosure at his farm in Choma and later in Livingstone nearby the Victoria Falls. Today the Crocodile Farm is open to visitors and school groups, who marvel at the enormous crocodiles who each would have snacked on a human being at some stage of their lives… Joe knows them all by name and seeing them respond to his whistle and waddle over is a truly amazing sight! His undoubted favorite is peg-legged Peggy. Several of the crocs have had their noses bitten off but survive quite cheerfully, looking more ferocious than ever.

Everyone except Joe Brooks would visibly pale when confronted by this sight...

He tells of the powerful natural antibacteria that crocodiles produce, more powerful than any human made penicillin. Their wounds, often inflicted by their own kind, never go sceptic and heal amazingly fast. They can live up to two years without eating.

When asked what he feeds the crocs on, Joe says in his strong Scottish accent and inimitable way, “Oh, anybody”!

Joe features in two books on his fascinating life, “Elephant Valley” by Elizabeth Balneaves and his own book “Siatwinda” which was published in 2009 by Safari Press in the US. 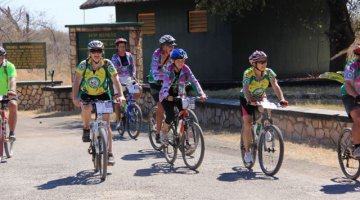