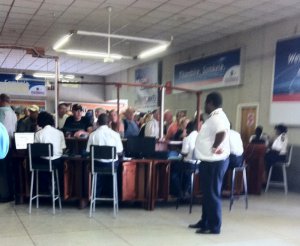 The one and a half hour trip was comfortable. But the three hours that followed at immigration was the most horrific experience for my visitors and for many other tourists with lots of money to spend – money that should be going into Zimbabwe’s empty coffers.

It was a full British Airways planeload of tourists – Americans Danes, Germans, Australians. After a three hour wait in boiling hot conditions, with no seats, no liquids, no air conditioning, most of them spoke about never coming back to Zimbabwe!

In spite of a galaxy of smartly turned out sweating Immigration officials, there was absolute chaos – with just two working computers to process over 100 people.

No one knew which queue to join. Nearly all of them had to fill in visa forms and then make payment, and then have their passports scanned. Here are some practical suggestions:

The signs used to determine the queues were hidden by the morass of people. They should be hung from the ceiling. People waited hours, only to find out they were in the wrong line.

Visa forms should be made available online and there should be a fast track queue for pre-completed visa transactions.

Once through the formalities, the porters did their best to locate the baggage, but it was all stacked higgledy piggledy and older tourists were battling to find their suitcases and to carry them.

Change, change, change, why does no one ever have change? When are Zimbabweans going to realise that they can go to the bank very easily every day and get change?

Our taxi driver told us awful stories of the many times that tourists had arrived and had poured their heated anger and disgust on the heads of the taxi drivers at the inept and antediluvian airport system.

Come on Zimbabwe, tourism is on the increase specially at the Falls. The Livingstone side of the Falls is bone dry right now whilst ours is still awesome and magnificent.

Let’s get out tourists back by making their first port of entry experience a pleasure instead of a nightmare. 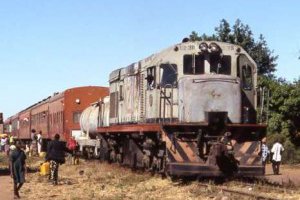