Out of it in Africa 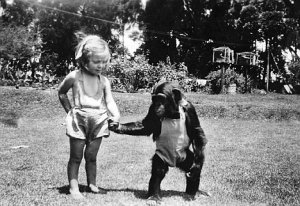 Monkeying around: Nicola Fuller and her pet chimpanzee at their home in Kenya

From http://www.dailymail.co.uk
COCKTAIL HOUR UNDER THE TREE OF FORGETFULNESS BY ALEXANDRA FULLER (Simon & Schuster £14.99)

Alexandra Fuller tells us she was born into a Scottish family from the Isle of Skye, whose motto is Death Before Surrender. My wife hails from Skye as well and I read this book with a new respect for her.

The difference is for her it’s just an old motto. For Alexandra Fuller and her parents, deep in the heart of Africa, it became terrifyingly true.

The author’s mother, Nicola Fuller, the beautiful, volatile, courageous woman whose story is at the heart of this book, believed in putting down roots and defending them. But as Alexandra wryly tells us, in Africa that often meant killing or being killed.

I don’t know why this book is so irresistible. Its narrative jumps backwards and forwards; no sooner has the author embarked on one story than it reminds her of another one.

But I beg you to persevere, because this prequel to Alexandra Fuller’s bestselling Don’t Let’s Go To The Dogs Tonight is one of the best accounts you will read about the white migrants in Africa at a time when the cold winds of change were blowing across the continent.

There had been Fullers in East Africa since the turn of the century – anthropologists, vicars and engineers.

Forced by death duties to emigrate after World War II, Nicola’s parents bought farming land in Kenya, close to the Ugandan border and near the small, dusty township of Eldoret. There were tennis courts and a country club and the only foe was the cobra that lurked in a nearby culvert.

As a child, Nicola’s best friend was a chimpanzee who was left alone to play with her in the garden. This was typical behaviour in a family of whom the author writes gaily: ‘My grandmother, Mum and Auntie Glug all spent time in institutions for the mentally unhinged.’

These are Nicola’s memories of her African childhood, related to us by her daughter with a sparkling, ferocious candour that leaves nothing to the imagination.

They had no time for the Happy Valley crowd; even if they had been in that league. Nicola dismissed them as cruel and silly and recalled looking after one of their babies whose mother, ‘Inky’ Porter, was so sozzled with cocktails and cocaine that the infant died of seizures within a day or two.

The first portents of what was to come were the Mau Mau uprisings in the early Fifties, when Kikuyu tribesmen in Kenya sought to regain some of their traditional lands from the colonial rulers. The ritual blood sacrifices, cannibalism, bestiality, torture and mutilation were withheld from Nicola – just as they were from me, a small boy living not very far away in Entebbe.

Nicola’s father, like mine, went everywhere with a service revolver; her mother slept with a Beretta pistol under her pillow. Few whites were murdered, but tens of thousands of Kikuyu were killed or imprisoned.

Many British colonials went home. But the Fullers stayed; for them Africa was home.

Nicola was briefly sent to safety in London to do a typing course and smooth out her settler accent. What she chiefly remembered of London was the smell of boiled cabbage.

Back in Africa, in the Sixties, Nicola’s new husband Tim answered an advertisement to run a cattle farm. He was asked if he played rugby. ‘Yes’. ‘What position?’ ‘Winger’. ‘You’ve got the job’.

Nicola had married the perfect settler type. Tim was stolid, honest, bluff, hard-working and harder-drinking. Nicola matched him in the drinking but was incongruously glamorous.

Tim was paid next to nothing to oversee a few hundred acres, but this instilled in them both a passionate commitment to the land – ‘My land in Africa’, Nicola called it.

These were the glory days. The Fullers then moved to a house overlooking the Rift Valley – along with their cats, dogs, polo ponies and Nicola’s trunks of Irish linen, Egyptian cotton, Le Creuset saucepans, hunting prints and bronze cast of the Duke of Wellington riding his favourite horse.

Lavender’s Corner, with its enormous pepper tree at the bottom of the garden, was their ‘perfect house’. Then it all went pear-shaped, as Nicola might have said. Her wonderful horse is killed, crops fail – and their baby son, Adrian, dies of meningitis.

The author, as always, finds the right words to describe this hammer-blow which flattens her mother: ‘Everything about Adrian’s death became a devastatingly slow injury, shards of hurt surfacing sometimes unexpectedly decades later.’ They move to Rhodesia, where drought strikes, and Tim has to find work in a smelting plant, and then to England where the author is born in 1969.

However, the rain and cold chase them back – this time to Ian Smith’s Rhodesia, one of the last bastions of colonialism. Here, on Robani, a farm carved out of the bush near the Mozambique border, Tim and Nicola decide to make their stand. Across the valley lived an exuberant Italian farmer, John Parodi, who toasted them with glasses of liqueur – ‘all different colours, like liquid jewels’. 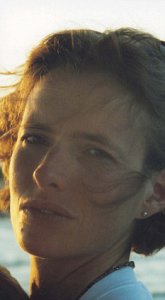 Within a few months, Portugal unexpectedly gave Mozambique its independence and triggered bitter guerrilla warfare between the freedom-fighters and Ian Smith’s white colonists in Rhodesia.

Tim was conscripted and this time they slept with an Uzi and put pistols on their side-plates. At her boarding school, Alexandra’s sister, Vanessa, was herded to the basement and hidden under mattresses during a mortar attack. At the Club, Nicola danced on the bar and uttered war-cries. Black rule? ‘Over my dead body. Life must go on!’

But air raids, mortar attacks, mines and massacres had shattered the peace of Robani. Their neighbour Parodi was shot dead on his own verandah; the guerillas poisoned the water with cholera and Warfarin and planted deadly anthrax in the villages. By now, three of her babies had died in infancy and Nicola retreated into the shadows of depression and madness.

This should have been the finale, but amazingly it’s not. Indomitable as ever, Nicola and Tim get off the floor, shake themselves down and, probably as you read this, they are sitting with their cocktails beside the Zambezi River.

Darkly funny and bracingly honest, this is an unsentimental portrait of a mother-daughter relationship and a vivid memoir of those white settlers who were turfed out of Eden to wander in the wilderness.