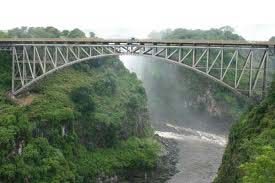 THE historical Victoria Falls bridge has turned 106 years old amid reports that it has become the second most visited tourist attractions behind the mighty Victoria Falls rainforest.
The bridge links the Victoria Falls in Zimbabwe and Livingstone in Zambia.
The bridge took 14 months to build and was completed in 1905.

At the weekend, the two neighbouring countries tour and adventure operators and tourists came together to commemorate the 106th anniversary The event was marked with fanfare.
To celebrate the historic structure that has been used to catapult economic development between the two countries and the south and north of the Sadc region, the Victoria Falls Bridge Company (VFBC) invited tour and adventure agents from Livingstone and Victoria Falls and members of the public.

At the same time, the celebration came at a time when the tourism sector is commemorating the tourism month.
In an interview at the bridge on the sidelines of the commemorations recently, VFBC marketing manager, Mrs Sonja Clay, said while they were celebrating the 106th anniversary, she was happy to note that they were receiving over 10 000 clients for bridge tours every month.

“The bridge is becoming popular with local, regional and international tourists as we receive over 10 000 clients every month
“The tourists will be keen on learning how the structure came to being in the first place and how it became a link of the region,” she said.
She said the figure resembled an upsurge in tourist’s arrivals especially in the resort town of Victoria Falls. “The monthly figure of over 10 000 clients is a 25 percent increase from last year’s figures.

Zimbabwean numbers are increasing, as compared to the situation from Zambia side as the numbers have remained the same.”
Mrs Clay said the bridge was truly a wonder of Victorian engineering and provided striking views of the Falls, Batoka Gorge and Zambezi River.

“Our historic Bridge Tour includes a special presentation on the history of the Bridge and the men who built it, a guided tour of the bridge visitor centre and a rare opportunity to walk on the catwalks used in the original construction of the bridge.”

Victoria Falls bridge was part of Cecil Rhodes’ dream of a railway line linking the Cape to Cairo, which was fuelled by investment and speculation about the potential of central Africa.
It was built at a cost of GBP72 000 and was the highest amount of that time in the world.

There are also steam trains from Zimbabwe and Zambia that also offeres special price rides as they were on show on the bridge.
The bridge crosses the Zambezi River just behind the Victoria Falls and is built over the Second Gorge of the falls.

Today the Victoria Falls Bridge is the location for the popular adrenalin – a 111 metres – bungee jump, bridge swing and slide. 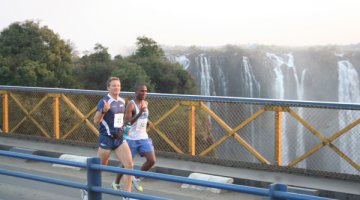 Results for the 2011 Victoria Falls Marathon!