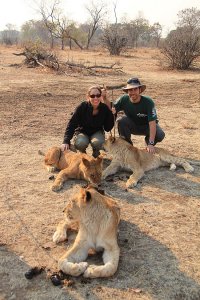 Get up before your knees get bit

So after blowing my entire first paycheck yesterday to pay for activities in Livingstone, Chris and I woke up bright and early today to head to an African lion rehabilitation centre this morning for our Lion Encounter. We had been a little skeptical about the lions, thinking it would be like a zoo and the animals would be anesthetized so we could take their pictures but luckily that wasn’t the case. The animals are part of a 4 step process, which slowly introduces them into the wild – the program is called ALERT if anyone is interested.

Anyway, when we got there we went over the important rules of not making eye contact with the lions, don’t have anything dangling, and only approach them from behind. We then headed out into the area where our cubs were. There were 3 ten month olds, 2 female and 1 male. The guides we were with have established dominance over the cubs so we were able to get pretty close to them

It really is unbelievable to see how lazy these animals are! The cubs were lying down when we got there so we were able to snap some pictures with the male. We then walk with the cubs for an hour – if you are walking next to them we were allowed to pet them, but you had to be careful because they enjoyed it so much they would plop down on the ground and had to be encouraged to get up again. What was really great was watching how social the cubs were, especially the females. They pretend to pounce on each other and really just run around and play. Sooo cute and such an incredible experience. I’m actually considering coming back to volunteer at some point during the year.

This afternoon we took a helicopter ride over Victoria Falls. We did the short one, only 15 minutes, but absolutely amazing. The falls were different from what we expected. There is basically a big crack in the ground with water rushing over the side. Very different from what we would see at Niagara. Since there was a full moon yesterday, we are heading to the Zambia side of the falls tonight to see the lunar rainbow or moonbow. Should be pretty!