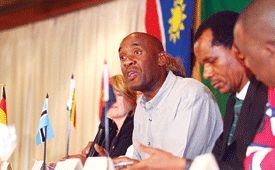 EPHRAIM KEORENG toured the Chobe River and writes of its potential to galvanise the much-touted regional integration of southern Africa
From http://www.mmegi.bw

The double-decker boat full of ministers, top government officials and journalists from Angola, Botswana, Zambia, Zimbabwe and Namibia kicked into gear as it took its passengers deep into the belly of the Chobe River. It was going to be an exciting afternoon.

With the ministers, including the German minister of economic development Dirk Niebel and the Executive Secretary of Southern African Development Community Dr Tomaz Salomao, we were in the company of raw power; men who had the ears of presidents. The waiters started passing beverages and snacks around, whilst our tour guide cleared his throat and to give us a detailed narration of the magnificent Chobe; how it weaves through five countries distributing its beauty and life and liberating populations from grinding poverty.

Like everybody else, I was armed with a camera to capture the scenic beauty. Though I was here for the story of this natural beauty, I also had personal reasons for coming here – to satiate an appetite whetted by countless stories of how beautiful and exciting a trip to the Chobe could be. It was going to be my escape from the daily grind of churning out stories to meet daily deadlines. So it was going to be an interesting trip.

As is usual, acquaintances and small groupings emerged as passengers gathered in knots and got lost in social banter. Suddenly the tour guide called for attention. We were approaching the controversial Sedudu Island, a small parcel of land that nearly threw Botswana and Namibia into a war as they argued over its ownership. From a distance, we saw elephants and other game sunbathing on the island. Then there was a distraction as water splashed on the western side, right inside Namibia. A big elephant was doing an impromptu welcome show for us.

It was playing with the mud and making slow deliberate movements, seemingly oblivious to our intruding presence.

Then sunset came, golden rays took over the horizon, painting a beautiful picture that saw photographers snapping hungrily at it. Only the sound of camera lens being adjusted could be heard through the silence. Finally we had had our share of the beauty, and the boat turned around a cue, which the tour guide took with gusto. “As you can see, Botswana owns the island after the ICC ruled that it is ours,” he said, whipping up submerged vestiges of patriotism amongst us. We went back to the riverbank, back to the Cresta Mowana Lodge for briefings and other information sharing exchanges.

Besides its varied and plentiful flora and fauna, the Chobe River is traversed by fishermen and boat operators who eke out a living, taking tourists on tours. “They call me Mahindra of the Chobe,” said Matengu Sinka, a big ebony-skinned man who would make a perfect fit an impi in Shaka Zulu’s army. Sinka is of Sesubiya extraction, a tribe found in the Chobe District in villages like Parakarungu, Kavimba, Mabele, Satau and Pandamatenga that also makes up the greater part of population of cosmopolitan Kasane.

Basubiya and rivers go a long way in history, especially the Chobe River. Like many of his tribesmen, Sinka is a powerful swimmer who does not need the aid of scuba diving equipment to reach the floor of the river. “I am known all over this district for my great water skills,” he told me. “Even the police know me because I always help to rescue people from drowning in the river. Ke bidiwa Sinka, for sinking to get them out.”

Sinka is representative of people who make a living from the Chobe River. It is a bowl from which they can get fish. But most importantly, Sinka and others have made a career out of the boat cruises. They are tour guides and boat drivers who take tourists on rides in the magnificent Chobe River. It has come to define their lives and culture; a lifeline. Besides the socio-economic role the Chobe plays in these villages, it is critical to the much-touted idea of regional integration of the southern African region.

Located at the confluence of four countries, the Chobe links Botswana with Angola, Namibia, Zambia and Zimbabwe through its waters. From the Zambezi River in Angola, it flows into Namibia in the Rundu region where it becomes the Okavango River that meanders into Botswana through the Okavango Delta at Shakawe, then into the panhandle before spreading wider in the Ngamiland District.

The MP for Chobe, Gibson Nshimwe, who was born in Satau where he fished from the river and hunted game along its banks, knows the Chobe like the back of his hand. He says from the delta, the water continues its journey as it flows into the Kwando River, then Linyanti River in the Chobe National Park before flowing back to Lake Zambezi on the Botswana side in the Satau and Parakarungu area. “Then Zambezi through the lower streams jet into the Chobe River,” he explains. “Then it goes to the Zambian side in the Zambezi.”

The legislator says the Kazungula area is the meeting point of the four countries of Botswana, Namibia, Zambia and Zimbabwe where the river takes the eastern watercourse, passing northeast through Kasane to the famous Victoria Falls in Zimbabwe on the border with Zambia. Together with Angola, the four countries have a project to harmonise land uses and manage shared ecosystems to promote tourism growth through increased trans-border opportunities.

Speaking at the official opening of offices of the secretariat of KAZA-Kavango-Zambezi Trans-frontier Conservation Area (KAZA TFCA) in Kasane last Friday, the Minister of the Environment, Wildlife and Tourism, Kitso Mokaila, said KAZA would promote investment and infrastructure development to support both conservation and the tourism industry. He said though the initiative was conservative based, it also had the potential to promote cultural linkages, peace and security, as well as regional integration.

KAZA is a conservation and development initiative among the five countries of Angola, Botswana, Namibia, Zambia and Zimbabwe. Mokaila told his audience that the countries had signed a treaty on how they would run KAZA two weeks previously during the SADC summit in Angola.

Nshimwe says in the five countries, there are wildlife parks located along the Zambezi River that assumes a different name in each country, the Chobein Botswana. The KAZA region, as it is to be known, is a trans-national conservation area that measures 4,440,000 square kilometres, making it the largest conservation landscape in the world. This area boasts diverse ecosystems, biomes and wildlife populations. Mokaila’s Zimbabwean opposite number, Francis Nhema, revealed that the region carries the largest population of the African elephant that is estimated at 250,000, making KAZA a major tourist attraction. It is expected to incorporate game reserves from the five countries.

The German government, which has so far pumped 20 million euros into the project, KAZA presents an opportunity for regional integration within southern Africa. Cordon fences will be brought down and corridors set to allow migrations to take place among the countries, Niebel said. “The intention is that in future, tourists will be able to travel through the nature park from Botswana to Namibia, Angola and Zambia and all the way to Zimbabwe with just a single visa. You will see how that attracts nature fans from all over the world,” he said.

He added that of more importance was that animal movement would not be hindered as game would no longer be stopped by borders created by humans as they went on their migratory routes. “In Botswana, for example, there are too many elephants, which poses a threat to biodiversity. In Zambia and Angola, there are only a few elephants left,” Niebel said. 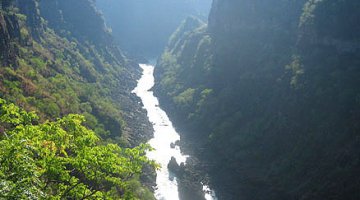 Construction of Batoka Gorge Power Station to start in 2014