We tourists rarely gain access to the food that fills the bellies of a nation. Even if we try to eat at the restaurants frequented by locals, those locals will be eating something very different at home. The home kitchen might serve meals that are less greasy and fatty than a restaurant kitchen, or rely on the freshest ingredients, or perhaps the cheapest ingredients. But, we don’t see that; we don’t know what the locals eat because those home kitchens are closed to us.

It’s a problem we have found all across the world, but especially in those places that rely largely on tourism. In a city like Livingstone, Zambia, where tourists flock to the famous Victoria Falls, we found plenty of Italian restaurants, traditional English five-star restaurants, and restaurants serving “African fare” with traditional African dancing as entertainment. But, after several days in the country, we had no clue what the locals ate.

And, so, we signed up for a cooking class booked through our fabulous hostel Jollyboys Backpackers. We didn’t expect our eyes to be blown wide open.

Anna helping me tie on a chitenge

Anna was a skinny African woman with beautiful wide eyes and short cropped hair in a polo shirt clearly two sizes too large for her. I suspected that she was a decade younger than me, and she confirmed later that she was not yet 21.

We rode to the market, a sprawling assortment of stalls and stands well past the touristed areas. Chickens squawked noisily and women sat under umbrellas in the blazing sun. They wore bright woven chitenges wrapped around their waists and we soon bought one for me to try. Mothers walked with infants slung across their backs, swaddled and tied to the mother’s back with another chitenge —- the cheap and easy predecessor to the Baby Bjorn, I suspect.

Most of the vegetables I knew. But, some I did not. Anna picked out bunches of chibwaba (pumpkin leaves), bitter leaves, and a green leafy vegetable she called rape (which is what we use to make rapeseed oil), dried okra leaves, and sweet potato leaves. We bought some of the vegetables themselves — okra, tomatoes, and onions — but others like sweet potato and pumpkin were considered too rich for daily consumption. We in the United States would never consider cooking the leaves of many of these vegetables but these greens were the foundation of the Zambian diet.

And, there was a chicken. Anna picked out a squawking live bird and stuck it in the trunk of the car. When we reached the small hotel at which we would cook, she asked us whether we wanted to watch her kill it. We vigorously shook our heads no. She walked to the back area and whacked off its head, returning in moments after rinsing off her hands in water. Anna’s assistant plucked the feathers off the chicken, then boiled it in water for about 30 minutes, and finally sauteed it in oil.

Next post Help for the disabled in Victoria Falls 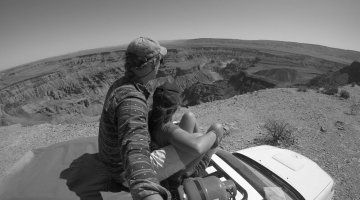