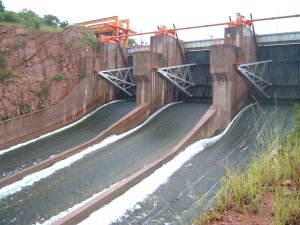 PRESIDENT Banda yesterday launched the commencement of works for the US$250 million Itezhi Tezhi hydro electricity project expected to produce 120 mega watts of electricity and create more than 450 jobs.

The power project would reduce the country’s current electricity deficit once completed and some of the areas most likely to benefit from the increased power supply include parts of Central, Western, North-Western and Southern provinces.

The project is being implemented under a private public partnership between ZESCO and Tata Africa Corporation. Speaking during the ground breaking ceremony, President Banda said it was the wish of his government to ensure that the energy sector was sustained in the country in tandem with the increasing demand for electricity.

He said the hydro power projects had been in the pipeline since 1999 and his government had simply reinvigorated the commitment to ensure that it was completed.

“The national power demand has been increasing faster than projected, largely due to the rapid growth of our economy at the average rate of 6.4 percent over the last six years,” he said. The president said it was imperative that the energy sector did not hold up the general economic growth.

He said the Sixth National Development Plan (SNDP) that his government had put in place clearly outlined the plans set in the energy sector such as the development of new power stations across the country.

He said the energy projects being worked on included the rehabilitation of Kariba North Bank Power Station, which was almost complete with only one generator remaining, and the development of works at the 360 megawatt Kariba North Bank extension project worth $420 million which was launched two years ago.

Mr Banda said there was also the 750 megawatts Kafue Gorge Lower project worth $2 billion whose works were launched on 20th July this year. The president said the other benefits to be drawn from the hydro project included the improvement of the water reticulation system in the district, construction of schools, construction of roads and rehabilitation of hospitals.

He said the project would also bring more business to the local suppliers of building and general construction materials. Mr Banda commended the ZESCO board and Tata for the commitment rendered in ensuring that the projects commenced.

He particularly commended Tata Africa Corporation for selecting Zambia as a destination fort its investment. He said his government wanted to make Zambia the most preferred destination for investment for both local and foreign investors.

The president said the sustainability of the efforts being made so far in the development of the nation required commitment from all stakeholders. Mr Banda said there was also need to ensure that the investments were protected from saboteurs of all kind.

“We need to safeguard our collective achievements,” he said. And Zesco board chairperson Kwalela Lamaswala said the project would be completed soon and both companies were committed to it.

India High Commissioner to Zambia Ashok Kumar said the development of the Itezhi-Tezhi project was a direct translation of the growing relations between Zambia and India. He said the project was under the Build Operate and Transfer mechanism and would be transferred to the government of Zambia after 25 years.

Next post Upswing for motivational travel to Southern Africa

Previous post Send us your favourite vacation images and videos!