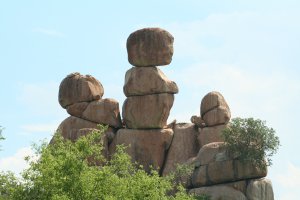 Since the Land Reform programme in 2000, tourism in Zimbabwe has steadily declined but after the Government of National Unity between President Robert Mugabe and Prime Minister Tsvangirai the sector is starting to grow again. After rising during the 1990s, with 1.4 million tourists in 1999, industry figures described a 75% fall in visitors to Zimbabwe in by December 2000, with less than 20% of hotel rooms occupied. This has had a huge impact on the Zimbabwean economy, where thousands of jobs were lost due to companies closing down or simply being unable to pay staff wages.

Several airlines have also pulled out of Zimbabwe. Australia’s Qantas, Germany’s Lufthansa and Austrian Airlines were among the first to pull out[1] and most recently British Airways suspended all direct flights to Harare. The country’s flagship airline Air Zimbabwe still flies to the United Kingdom but has to make several stops en route for refuelling.

The Eastern Highlands are a series of mountainous areas near the border with Mozambique. The highest peak in Zimbabwe, Mount Nyangani at 2593 metres is located here as well as the Bvumba Mountains and the Nyanga National Park. World’s View is in these mountains and it is from here that places as far away as 60–70 km are visible and, on clear days, the town of Rusape can be seen.

Great Zimbabwe as featured on the defunct $50 note

Zimbabwe is unusual in Africa in that there are a large number of ancient ruined cities built in a unique dry stone style. Possibly the most famous of these are the Great Zimbabwe ruins in Masvingo which survive from the Monomotapa Empire. Other ruins include Khami Ruins, Zimbabwe, Dhlo-Dhlo and Naletale however none of these ruins have received as much publicity as those Great Zimbabwe.

The Matobo Hills are an area of granite kopjes and wooded valleys commencing some 35 kilometres south of Bulawayo, southern Zimbabwe. The Hills were formed over 2000 million years ago with granite being forced to the surface, this has eroded to produce smooth “whaleback dwalas” and broken kopjes, strewn with boulders and interspersed with thickets of vegetation. Mzilikazi, founder of the Ndebele nation, gave the area its name, meaning ‘Bald Heads’. They have become famous and a tourist attraction because Cecil John Rhodes famous for his vision that led to foundation of Rhodesia, and other early white pioneers like Leander Starr Jameson, Major Allan Wilson, and most of the members of the Shangani Patrol are buried in these hills at another site named World’s View.