On Saturday, 20th August Wildlife and Environmental Conservation Society members and a few others enjoyed a very educative and inspirational field trip to Zambezi Nkuku Farm.

What some may not know is that the farm not only raises chickens to sell for meat, but is also venturing into a variety of other projects to try and improve the environment of Livingstone. Nearly 30 people, one third of whom were children, teamed up in 4 vehicles and headed off to the farm, located about 20km West of Livingstone. We were met by farm owner Arthur Sonnenberg, alias, “Mr Nkuku”, wearing his flamboyant chicken hat and yellow T-shirt.

The first project we were shown was the compost production factory. The farm first started composting as a way of disinfecting the manure produced by the chickens, to avoid the spread of disease. Greens from the kitchen and garden were added, and a fertile, healthy compost was produced.

However, the farm did not produce enough greens to add to the manure, so started collecting kitchen waste from hotels and lodges. They then ventured into collecting organic waste from markets in Dambwa, where education had to be carried out to teach people what organic waste consisted of and why it was important. The farm now has a garbage truck, garbage bins stationed at various lodges and markets, and it employs 10-12 staff in making the compost, which is used within the farm and also sold.

Arthur appealed to all of us to try and do this in a small way in our own back gardens, as it made good use of garden and kitchen “waste”, which he actually referred to as a “resource”, and greatly improved soil fertility, without having to use expensive and potentially harmful chemical fertilisers.

Apart from compost production, Arthur was also experimenting with using other types of “waste”. He had started making experimental floor tiles out of broken glass bottles, and making briquettes out of waste paper and cardboard which can be used like charcoal for cooking with.

He was also experimenting with solar cooking and making more efficient charcoal braziers (chikos). The next project we were taken to see was the nursery,
where hundreds of different types of plants are being grown.

Some of these are ornamental garden plants and fruit trees, but many are indigenous trees, some of which Arthur has been donating to schools and he plans to get volunteers to plant thousands more next year. Some of the seedlings were being grown in Chibuku packets, which Arthur informed us were biodegradable, meaning
they completely break down and are therefore not harmful to the environment.

“Mr Nkuku” is also an agent for “Zambikes”, which are quality bicycles assembled in Zambia and are a non-polluting form of transport. One form comes with a trailer and another one with a family-sized carrier.

In all, the group found the trip interesting and enlightening, and we were all encouraged to put in more effort ourselves towards conserving the environment, starting in our own homes. 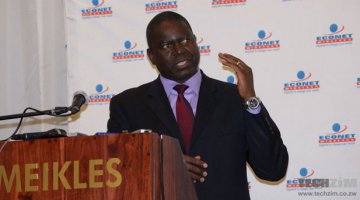