From http://www.times.co.zm
By Business Reporter

THE Zambia Tourism Board (ZTBA and a Germany film-maker have entered into a partnership to promote tourism in the country through a package that includes shooting a movie at a cost of K23.5 billion.

ZTB managing Director Felix Chaila said at a media briefing in Lusaka yesterday the initiative was an opportunity for Zambia to benefit more from tourism as South Africa had reaped from movies like Shaka: The Zulu and Sarafina.

“This is a chance to market Zambia through a movie. This will bring out the beauty of the Victoria Falls and tell the world more about Zambia. We are excited about this project and from what we have seen, the shots will really prop the Victoria Falls,” he said.

The movie would be about a Zambian boy tracing his roots after the death of his foster father and in his journey, the Victoria

The shooting proper starts next month and the movie will be premiered in Zambia in June 2012 while the working-title for the movie is Kadu’s journey.

Mr Chaila said Zambia would gain as the movie would market Zambia tourism symbol and help in raising the numbers of arrivals in the country.

Film Director Thico Rothkirch said after visiting the Victoria Falls he decided to make a movie that would bring out the amazing scenery of the waterfalls.

Mr Rothkirch said the Victoria Falls was a spectacle that everyone in the world needed to see and was the reason he would feature it in the movie that would be shot mainly in Livingstone.

Mr Rothkirch, who is director of Save Our Nature Media said the movie, the first to bring out the real beauty of Victoria Falls, would cost €3 million and from the 100 actors, about 60 would be locals.

“After I visited the Victoria Falls I was so overwhelmed by the beauty and there is nothing like that in the world. And when I had an idea for a movie, it suited perfectly and initial shots have been exciting,” he said.

First Secretary at the Zambian Embassy in Germany Susan Kapema said the movie would bring a good picture about Zambia unlike most foreign productions that have focused on the negative aspects.

Ms Kapema said that Rothkirch was a renowned film maker in Germany and had done popular cartoons Laura Star and Little Teddy Bear and would certainly boost Zambia’s standing internationally. 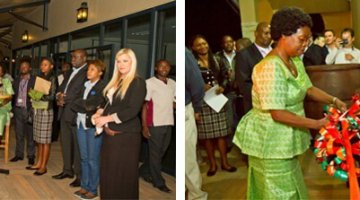