The Chanters Lodge Experience with the Milli Jam Ingredient featuring George da Soulchild was conceived and launched in late 2007on 107.7 fm soon after the birth of Zambezi FM and has been a hit on the station every Sunday at 20.30 hrs since that time. The show is co-hosted by Milli Jam and George ‘Kaufela’ da Soulchild and features a great mix of music and chat. As well as latest international pop hits, local artists’ work is promoted and played. There is always a guest on the programme and whilst this is often an international guest staying at Chanters Lodge it is also sometimes a local personality or a member of staff at the lodge. The show is written up on Lodgeblog the following week to provide the guest with a permanent record of their appearance on the show. International and local chart news is a regular feature and listeners are given the chance of winning a dinner for 2 at Chanters Lodge with drinks by texting in the answer to a simple question aired on the show. First answer received usually wins!

The owner and manager of Chanters Lodge, Richard Chanter, co-hosts the programme. Richard, a veteran of the Zambian hospitality industry and long time entertainer had been in Zambia since 1979 having previously been General Manager of Southern Sun Ridgeway Hotel in Lusaka through the 80’s and early 90’s. He established his own business in the form of the 11 roomed Chanters Lodge in July 1998 and has become a well known figure in Livingstone. In 2008 Richard received an Ngoma Award for his contribution to the development of Zambian musicians during his more than 30 years in Zambia.

Click the button below to listen to Zambezi FM online: 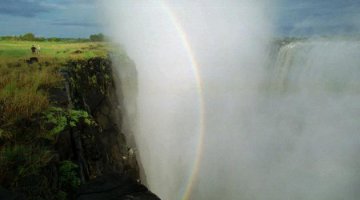