From http://news.scotsman.com
10 August 2011
By David Torrance 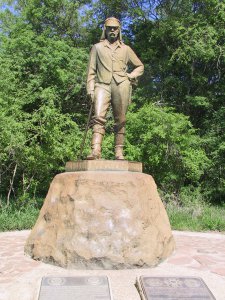 I probably pass the statue of David Livingstone at the east end of Princes Street most days I’m in Edinburgh, although until recently I knew little or nothing about his career.
It’s a fine memorial. Erected four years after his death in 1873, it depicts the famous missionary and explorer imbued with Victorian confidence, a bible in hand and pistol and compass at his waist.

A few days ago I saw another statue of Livingstone, this time at the entrance to the Victoria Falls in Zambia, “discovered” by the Scot from Blantyre in 1855. It’s not a patch on its Edinburgh counterpart, but it finally brought home to me not only Livingstone’s historical significance (of which more later), but also the enduring links between this part of Africa and Scotland.

Last week I was in Malawi, or more specifically on the banks of Lake Malawi. There, almost everyone (noticing that I was reading a biography of Livingstone) interrupted me to enthuse about the explorer’s life. “He discovered this lake,” they told me, “and brought Christianity to Africa.” Many reminded me that in southern Malawi there are two cities – Livingstonia and Blantyre – inspired by Livingstone’s achievements.

Yet the truth, as ever, is more prosaic. As Tim Jeal’s engrossing biography informed me, Livingstone neither “discovered” Lake Nyassa (as it was before independence) in the strictest sense of the word – Portuguese traders had beaten him to it – nor was he a very good missionary. Indeed, Livingstone converted just one native African during his time on the Dark Continent, and he later lapsed.

Livingstone, in modern parlance, simply had very good PR. In fact, when the explorer embarked upon his final mission to discover the true source of the Nile, his reputation back in the UK was rock bottom. All his big ventures had failed – not least his efforts to persuade the Foreign Office to colonise what later became Malawi and the two Rhodesias – and he was perceived, correctly, as a rather vain, even reckless man who had caused unnecessary suffering to other missionaries in Africa.

The enterprising journalist Henry Morton Stanley changed all that. Despatched by the New York Herald – a newspaper, Livingstone’s biographer informs us, whose reputation “was founded on its ability to print sensational and scandalous stories, more with a view to the number of papers sold than to the truth” – to “find” Livingstone irrespective of cost, when Stanley finally did so in 1871 his description of the ailing explorer as a saintly man of God became the defining portrait of modern mythology.

Livingstone’s life and legacy is now taught in Malawian schools (I suspect it isn’t anywhere in Scotland) and I encountered half a dozen people (including a barman) who knew about his birthplace in Blantyre, his education at Glasgow University and, as already mentioned, a rather romanticised view of his missionary and exploration work.

But it wasn’t all bad.

Shortly before his death, Livingstone submitted evidence to a House of Commons committee on the Arab slave trade in Eastern Africa that was crucial in compelling the UK government to lean on the Sultan of Zanzibar and have the cruel business abolish
ADVERTISEMENT
ed once and for all. Furthermore, at Livingstone’s funeral, James Stewart decided to start a Free Church of Scotland mission on the banks of Lake Malawi, while the established Kirk followed suit in what became Blantyre.

These links and what the political climate of the 1880s deemed the Scots’ “sentimental attachment” to Nyasaland when missionaries came under attack, led to it becoming a British Protectorate. Indeed, so ingrained in Malawi’s life was the Church of Scotland that Hastings Banda, the Nationalist leader and first independent ruler of what became Malawi, was a Kirk elder and retained his religious convictions even when his leadership became autocratic.

That instinct remains in Malawi to this day. Recently a leaked UK cable referred to the country as “autocratic and intolerant of criticism” and as a result, rather proving the point, Britain’s High Commissioner was expelled from the capital Lilongwe. The UK responded by expelling Malawi’s representative in London and withdrawing £335 million of aid.

President Bingu wa Mutharika’s government – described as a “regime” even by Africa newspapers – is also cracking down on protests against fuel and electricity shortages, rising prices and high unemployment. “If you go back to the streets,” he warned them a few days ago, “I will smoke you out.” There’s even talk of a military coup. The Scottish Government, curiously, doesn’t seem concerned about this, and recently confirmed that its support for Scottish-based charities in Malawi will continue regardless.

But such is the African disease – government geared towards enriching tribal cronies rather than improving the lives of an impoverished people. Despite all this, Malawi and Zambia are wonderful countries, full of friendliness in adversity and astonishing scenery. Indeed, I’ll give the last word to Scotland’s own David Livingstone, who memorably described the Victoria Falls as providing “scenes so lovely” that they “must have been gazed upon by angels in their flight”.