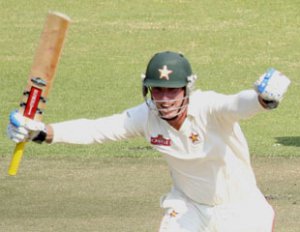 A dominant all-round performance by Zimbabwe, capped by their bowlers slicing through the Bangladesh line-up on the fifth day saw them win their comeback Test, after an almost six-year exile from the format. It took just 15 balls after lunch for Zimbabwe to complete their victory after a near flawless morning session from the bowlers. Brian Vitori and Kyle Jarvis created the pressure upfront, leaving the Bangladesh line-up ripe for the picking for Chris Mpofu and Elton Chigumbura.

Bangladesh’s batsmen had a tough, but doable, task on a pitch that has not deteriorated and remained good for batting, needing 263 runs with seven wickets in hand at the start of the day. Instead of applying themselves with patience and planning, though, they played a clutch of careless shots, especially as it became evident that their challenge was dissipating. Abdur Razzak’s 43-run cameo added a little bit of sunshine to an otherwise dark performance that mirrored their first innings display in terms of execution.

Zimbabwe had done the bulk of their hard labour in the four days preceding the final one, with centuries from two of their stalwart batsmen, Hamilton Masakadza and Brendan Taylor. But, it was the new-ball pair of Brian Vitori and Kyle Jarvis who impressed most, especially after being labelled “ordinary” by a confident Tamim Iqbal at the end of day four and they exacted their revenge early on the fifth. Vitori began by demonstrating that he could move the ball into the right-handers as well, while Jarvis bowled with brisk pace and variety, mixing up his full, short and slower balls.

Mohammad Ashraful was up to the task, at least initially. He left well and took advantage of anything overpitched. He batted with the same calm that he had employed in his first innings and was also doing a fine job of marshalling his partner, Mushfiqur Rahim, who showed composed judgment.

Vitori continued plugging away, getting some balls to move away, others to hold their line and after several overs of nagging length, Ashraful could take no more. He tried to push a delivery away but it jagged in late and took the inside edge onto the stumps. With that dismissal, Bangladesh were rattled and Zimbabwe fired up.

Vitori followed Ashraful’s wicket with a superb over, beating Mahmudullah’s bat twice. The danger for Zimbabwe came when the opening pair was replaced but Mpofu and Chigumbura did not let up. Mpofu varied his lengths while Chigumbura put on an impressive display, bowling as many slower balls as possible.

Mahmudullah was determined to cash in where he could but his over-eagerness started a mini-collapse, during which Bangladesh lost three wickets in 12 balls for seven runs. He tried to cut without any foot movement and was caught behind. Five balls later Shakib Al Hasan, who also played irresponsibly, went to a sharp catch from Taylor at second slip after pushing at a length ball, and then Mushfiqur Rahim’s more careful knock ended when he flicked a ball to square leg.

Zimbabwe could smell blood but instead of tracking it down with a killer instinct, they relaxed a little and allowed Abdur Razzak to have some fun. He smoked five fours off a Mpofu over and three sixes off Ray Price, two of them slog sweeps. The cameo ended when Chigumbura, from around the wicket, broke through his defence and bowled him.

Bangladesh had little to hope for after that and their misery ended inside three overs after lunch. Jarvis struck with the first ball, bowling Shafiul with a length ball that pitched on middle and held its line. With just one more wicket to get, Zimbabwe put in six slips for Robiul Islam, who survived a confident lbw shout first up.

He defied the field placing with two fours on the leg side, but was never going to last for any length of time. Jarvis claimed his fourth wicket of the innings, trapping Robiul lbw with a ball that jagged in and hit him on the front pad. As umpire Kumar Dharmasena raised his finger, Zimbabwe’s players immediately formed a huddle, a collective show of unity to mark their victorious return to the Test fold.