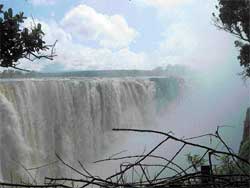 As my South African Airways flight to Victoria Falls in Zimbabwe begins to descend, I peep through the window to get an aerial glimpse of the wondrous water spectacle that I have been dreaming to see for years.

Thundering smoke: Victoria Falls. Photo by author“No, you can’t see it from here,” says the African passenger next to me. “But you will see a rising mist soon after you get out of the airport.”

Shortly after driving out of the airport, our driver, Ken, stops the car next to a hotel called Spray View and tells me to look straight ahead. At a small distance, I notice a massive volume of smoke rising above the ground into the horizon. “It’s not fire or smoke; it’s the rising water spray from Victoria Falls,” Ken clarifies. I get out of the car and attempt to capture the view in my camera; it was my first encounter with Victoria Falls, one of the seven natural wonders of the world. I learn from Ken that this water-spray shoots up as high as 400 metres, as the forceful Zambezi River, after travelling a distance of over 3,000 km through Angola, Zambia and Congo, flings itself over a 1,700-metre wide cliff into a 110 metre deep gorge at a rate of 5,50,000 cubic metres of water per minute, making it the largest sheet of falling water in the world.

Driving a little closer to it, I begin hearing an incessant thundering type of roar, which explains why local Zimbabweans call this wonder, Mosi-oa-Tunya, which means ‘smoke that thunders’. Located between Zimbabwe and Zambia in southern Africa, this water cascade remained hidden till Scottish missionary-cum-explorer, David Livingstone, discovered the site in 1855. He landed on the biggest island on the lip of the falls, now in Zambia and called Livingstone Island, from where he first viewed huge volumes of water plummeting into a deep and wide chasm. Mesmerised by its unspoilt beauty, he named it Victoria, honouring the then queen.

Geographically, one third of the natural wonder braces Zimbabwe with Zambia claiming ownership of the rest. There has always been a strong debate on which location offers the best view. Till recently, many stuck to Zambia; not because of its greater physical share, but more due to Zimbabwe’s economic crisis and political turmoil. However, the situation in Zimbabwe is improving and tourists like me are flocking back to the country.

Sixteen out of 19 prime viewing points are on this side and an added attraction for many is the stay at the 1905 built Victoria Falls Hotel, often referred to as the Grand Dame of Victoria Falls.

There are different ways to view the falls. However, like most visitors do, I first opt to get the ground view and went for a guided trek of around 3 km leading along the edge of the falls. Starting at the statue of Livingstone, we are taken to various vantage points through dripping leaves of untamed rainforests for best viewing opportunities. Though I had earlier seen several images of the falls in calendars and picture postcards, nothing beats the first hand experience of physically standing head-on and watching the grand water-spectacle unfolding before you.

The falls’ precinct is a national park and hence its wilderness is well preserved, unlike its Canadian/American counterpart Niagara where you turn back and see glitzy neon signs of Planet Hollywood and Pizza Hut. Being the rainy season, the volume of water tumbling down is mammoth, making a constant thundering noise and creating high winds, thick mists and at times, bucketing rain, as heavy as monsoonal downpour. Before leaving the hotel, we were warned about the wet weather and were supplied with umbrellas and waterproofs, but they were useless. We get drenched as we soak in nature’s wonder.

However, playing hide and seek with nature turns out to be fun. We hurriedly run around from one spot to the other, like playful kids, trying to capture a clearer view of the falls, when the sun intermittently breaks the hazy envelope created by the cloud, mist and rain. One of the unique aspects of this natural grandeur is the flashing of consistent rainbows. To fully appreciate the incredible size of the cascade and its power, get an aerial view of this wonder. Helicopters, micro-light and fixed wing flights are available.

However, the ride is expensive. You are looking at $120 per person for a 15-minute ride.
Victoria Falls offers many other activities to fill in your days; the most exhilarating is bungee jumping into the deep chasm from a 200-meter-long bridge lying in the no man’s land between Zambia and Zimbabwe. The bridge, where you can walk by obtaining a gate pass from the respective country’s border post, is packed with jumpers who enjoy the adrenaline rush and with spectators like me who are equally happy to simply watch people take that leap.