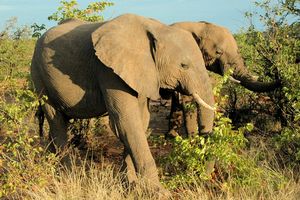 The presidential herd – a herd of elephants granted “perpetual protection” by President Robert Mugabe – faces severe threats as mines and human settlements mushroom in their conservancy in Matabeleland North.

Environment and Natural Resources Management Minister Francis Nhema has declared that doing anything that harms the presidential herd is as good as going against Mugabe.

However, it is Zanu-PF officials who have been implicated in poaching activities around the country.

This is especially so in Matabeleland North, where the biggest national park, Hwange, is located, as well as investors who have been given mining concessions in that region.

The presidential herd and all the other animals in the Sinamatella area of the Hwange are in danger from toxins that are found in the surrounding rivers.

Makomo Resources, a coal mine given a licence despite protests from stakeholders in Gwayi and Dete, is in the heart of the Hwange National Park.

“Mining activities right inside the national park are not healthy. You will find toxins that pollute the water that is taken in by the wildlife.

“So if the presidential herd and other animals consume this water what would become of our remaining animals?” said Langton Masunda, the Gwayi Conservatory chairperson.

“Since this is the presidential herd we are talking about, no other activity should be given priority over a species that the president dedicated to protect.”

The protected area is the 14th cross-border conservation area in the Southern African Development Community (SADC).

Mining activities on the Zimbabwean side are starting to affect the park’s wellbeing as animals are exposed to dangerous toxins and hungry farmers in Zimbabwe.

“Activities on the ground are a breach of regional agreements. Part of the agreement among member states says that animals should move freely and their ecology should not be disturbed, but now that things are changing on the Zimbabwean side in a few years the whole region will start feeling the effects,” added Masunda.

With more than 20 mines given licences in the area, humans are also at risk.

The extraction of coal is likely to culminate in water pollution through acidic mine drainage.

Though water affected by acidic mine drainage can be treated, this comes at a cost and it would definitely strain the budgets of the country and local authorities.

South Africa is also struggling to contain acidic mine drainage at some of its mines.

In the late 1990s Hwange Colliery Company Limited failed to control the acidic mine drainage from one of its disused mines and the pollutant flowed into the Deka River, killing aquatic life and livestock. Children also developed health problems after consuming the polluted water.

Next post Dave Varty at the Katombura Rapids, Zambezi River