From http://www.howwemadeitinafrica.com
By Jaco Maritz
July 28, 2011 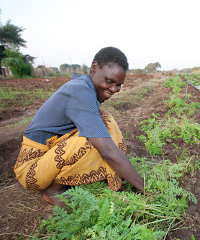 Farmers in Livingstone, Zambia are supplying vegetables to a number of hotels and retailers.

Community farming projects in Africa have a much greater chance of making a real difference to the lives of rural farmers when there is a strong private sector company providing a ready market for the produce, writes Jaco Maritz
Farmers in Livingstone, Zambia are supplying vegetables to a number of hotels and retailers.

Many farming development projects in Africa have focused on assisting farmers to increase yields to ensure that there is enough food on the table. While these programmes have addressed rural food security, they have failed to provide farmers with new markets to sell their surplus produce. After receiving the sound technical advice from extension workers and NGOs, many farmers had to watch helplessly whilst their resultant increased production got rotten for lack of markets.

Agribusiness in Sustainable Natural African Plant Products (ASNAPP), an NGO with offices in a number of countries across the continent, however, subscribes to a “market-first” approach, developing projects based on a sound business case that meets the needs of the intended market.

“We take a market-first, science-based approach to project development,” says Dr Petrus Langenhoven, agronomist and greenhouse specialist at ASNAPP in South Africa. “The problem with many NGOs is that they don’t look at projects from a business point of view.”

ASNAPP’s projects are supplying well-known private sector players such as Freshmark, a subsidiary of pan-African supermarket group Shoprite and responsible for the retailer’s fruit and vegetable procurement and distribution. Outside South Africa, Shoprite has a presence in 15 other countries on the continent. Freshmark also supplies most of these outlets.

ASNAPP has partnered with Freshmark on various projects throughout Southern Africa. “We try to supply them with fresh produce wherever they have outlets,” says Langenhoven. “They want their supplies to come from both commercial farmers as well as smaller projects.”

One such partnership with Freshmark is the Tshwaraganang community project located near Kimberley in South Africa’s Northern Cape Province. The hydroponics project, initiated by the provincial government, comprises the “soil-free” production of cucumbers, brinjals and tomatoes under a 3,600 m2 greenhouse. After a rocky start, ASNAPP was asked, in 2008, to get the project back on track. This was the effective birth of Tshwaraganang Hydroponics.

ASNAPP secured a deal to supply cucumbers to Freshmark in Bloemfontein (200 km from the greenhouse). Freshmark formally registered the project as one of its permanent supply sources. This provided Tshwaraganang Hydroponics with a ready market for its produce.

The greenhouse staff also received training in the theory and practice of hydroponics production. Trainees had to spend several weeks at ASNAPP’s experimental farm facility in Stellenbosch, South Africa.

By mid-2009, less than a year since selling began, Tshwaraganang Hydroponics generated a total of more than R600,000 as direct income. This was a significant amount for a community that barely a year ago earned almost nothing.

The future for the Tshwaraganang community looks bright. Freshmark is now set to open up its pepper and tomato supply chains to Tshwaraganang Hydroponics. A modern packhouse facility is also currently under construction and there are plans to expand the greenhouse production base to at least one hectare.

Another project where ASNAPP has connected farmers with the private sector is in Livingstone, Zambia, a tourism centre for the Victoria Falls. Here ASNAPP negotiated a deal with the Sun International hotel group to buy vegetables from the rural farmers around Livingstone.

A vegetable production network, using a combination of conventional farming systems and hydroponics technologies, was subsequently established, and farmers started to supply the Zambezi Sun and Royal Zambezi hotels. Supply contracts have also been established with other hotels and lodges as well as with retailers such as Freshmark and Spar.

Some individuals have emerged as entrepreneurs, employing other members of the community. Once such agri-entrepreneur is Stephen Chimuka Mwinga who heads up the satellite farmers of the Kabuyu area. He employs 25 farmhands on his five hectare vegetable farm, producing crops such as tomatoes, broccoli, cauliflower, garlic, spinach and cabbages.

Before ASNAPP’s intervention, farmers living in the rural areas around Livingstone practiced primitive farming techniques and many lived on less than US$1 a day.

The possibility of cultivating table grapes in the area is currently also being investigated by ASNAPP, Stellenbosch University and Sun International.

At the end of 2010, ASNAPP had 23 private sector partnerships in the Southern Africa region. In addition to Freshmark and Sun International, companies involved in purchases from smallholders include Zambian Oil Extracts and Colourants (ZEOCO) Limited, NALI Industries (Malawi), Dynamic InterTrade (South Africa), Protea Hotels and Woolworths, to name a few.

Previous post Zambezi. Journey of a river, by Michael Main 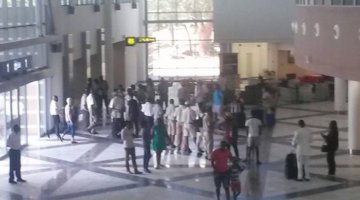