Zambezi. Journey of a river, by Michael Main 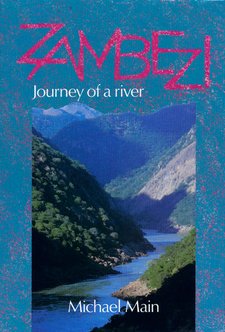 Journey of a River

Mike Main introduces: The Zambezi challenged me, physically as well as mentally. Like arriving at the summit of a mountain, finishing this work evokes feelings not of victor and vanquished, but respect and therefore sadness at the parting.

For the river has dominated my life for three years and after all the travel, the reading and the studying, I experience no sense of conquest, but instead, a feeling of awe. Awe at how little I have learnt compared to how much more there is to learn. I leave the experience of the Zambezi humble, but elated, for it has also been a time of great excitement and achievement. I have a passion for learning about things that are of interest to me, I thrive on excitement and adventure and meeting interesting people. The Zambezi has given me all this in great abundance. Above all, I like sharing the knowledge and experiences with others and that, I hope, this book will do. Looking back over the events of the last few years, I realise that I have been fortunate and privileged to enjoy experiences that are beyond price and that, because they are now memories, can never be taken away. For example, how could I forget walking across the lip of Victoria Falls? Others have done it also. At the right time of year it is not particularly dangerous – but for me it was elemental, exciting and unforgettable. For obscure reasons, Livingstone is one of my own names and, although we are not related by blood, I cannot help identifying with the man. For this reason the visit to Livingstone Island was doubly momentous for me.

So too was reaching the source. It had become a symbol of the whole project and for months afterwards, I did silly things like carrying round a few litres of water from the source. Small amounts were imposed upon chosen (and tolerant) friends! Feeling the electric atmosphere when the Litunga of the Lozi people struck the first beat of the royal drums; watching, heart in mouth, as my Jack Russell Gypsey raised her hackles at a huge bull elephant which, gentleman that it was, majestically gave ground to her diminutive form; kyaking through the wild white water of the upper river and riding rubber rafts through the maelstrom of the rapids below Victoria Falls – these are some of the Zambezi experiences that have led to the making of this book.

The book is not, however, the diary of an incautious or reckless adventurer. To me it has been a way of communicating, of sharing with others, a small portion of what is exciting and fascinating about the river and its people. In the course of my research, I learnt much about the Mwene Mutapa empire, about strange two-toed people, trees that kill animals and send messages to one another, concubines in Sofala and cannibals in Mozambique. How could I possibly resist telling you of a tennis court with flowers painted upon it in the heart of a malaria-ridden mangrove swamp? Or fail to point out Livingstone’s transformation from a missionary to an explorer and then follow the highlights of his journey across Africa? Nor could I ignore the tragedy for Livingstone of Cahora Bassa or resist the authenticated facts of silver mines of fabulous wealth.

It would be criminal to know of, and not share with you, the story of the man who crossed Africa in a boat and talked his way out of difficulties with a bagful of glass eyes! Surely I would also be wrong to omit the facts about a frog-eating bat or turtles whose sex is determined by temperature? The Zambezi overflows with anecdotes and amusing, interesting stories. I hope you enjoy reading them as much as I’ve enjoyed finding them.

High in the heart of Central Africa’s savannas is the place where the Zambezi is born. It is not a place of mountains, grey dripping mists or hanging moss, nor is it home to dramatic scenery or wild white foam-filled rivers tearing at the earth. It is a region of pervasive, gentle beauty, as if such a nurturing base is a necessary counterpart to the violence, tumult and tempestuous passage the river will encounter as it carries, bit by bit, its own life-giving continent to the sea.

There is an intangible feeling in the air of the Zambezi’s home that is at once distinctive yet hard to convey. Perhaps it springs from within me and I alone am aware of it. Partly, no doubt, it has to do with treading at the very start of a river that has occupied so much of my time, energy and thought. It is a reverential sensation, tinged with excitement and adventure.

At the source, there is no impression of height, for one stands upon an ancient and much eroded upland area. What mountains may once have been, are rendered into gently rounded shoulders of rock and earth, clothed in a patterned shawl of tree and grass. The road in northern Zambia follows the watershed through an endless succession of beautiful meadows interspersed with stands of tall forest. The meadows are natural and swathes of towering grass reflect not only the fertility of the region but the high and frequent rainfall.

For me the watershed itself is the basic ingredient of the region’s special magic for, inconspicuously, it divides the very continent. It is possible to stand on the moist, grass-covered earth under the trees at any one of an infinity of places where, on either side, the ground slopes imperceptibly away from you. Here is the invisible line that irrevocably separates coast from coast. A drop of rain that falls to my left will travel by way of the Congo to the great western sea: one on my right will follow the Zambezi to the coral-clad shores of the Indian Ocean.

Just off a shoulder of rising ground, in an area of open woodland, a trail of dark green riverine forest leads up-slope to a tiny valley. Shaped like the hollow of a cupped palm, its brown bracken sides slip beneath the canopy of green to become the permanently wet forest floor. Here, the roots travel overground, fearing suffocation below, supporting the bodies of last year’s leaves and linking one to another in a tangled network, anchored by the buttressed bulk of a forest giant. Beneath the roots and between the ochre, red and yellowing leaves, the gurgle of running water sounds, leading the listener to the heart of the amphitheatre and the silence of small stilled pools which reflect the sky, the trees, reeds, ferns and the listener’s face. This is the beginning.

It is my intention, during the course of the chapters that follow, to acquaint you with fact and anecdote about, or associated in some way with, the Zambezi River. It may well be in order now, therefore, to describe in broad outline the Zambezi’s course so that you might more easily follow the journey and anticipate our direction. From its source, at the very north-western tip of Zambia, the Zambezi first travels north before turning west, past the foot of Kalene Hill, and crossing into Angola, heading towards the Atlantic. Shortly, however, it turns south and, by now a substantial river, re-enters Zambia at Chalose about 400 km from its origins.

In western Zambia the river passes through an area once known as Barotseland but that is now simply part of Western Province. This region of the country is relatively flat and is distinguished by its covering of Kalahari sands which, in places, may be as deep as 50 m.1 The sands of the Kalahari are aeolian in origin and, for this reason, the grains are rounded. Wind-blown for millennia, they are a remnant of a once vast desert and although the area is by no means a desert today, they remain extensive in their distribution, stretching without a break from the Orange River in the south to the most northerly reaches of the Congo.

It is in the shallow valleys and floodplains of Barotseland that the Zambezi annually inundates huge tracts of land. On these floodplains and on the islands within them, the Lozi people established their kingdom and live to this day, maintaining their tribal integrity and their colourful tribal ceremonies. […] Contents of Zambezi – Journey of a river

Preface
1. The Great African Divide
Where the Zambezi is born. Geology and geomorphology
2. A River Kingdom
The Lozi people and their Kuomboka ceremony
3. In the Name of the Father
David Livingstone: from missionary to explorer
Early Zambezi missionaries and the price they paid
4. Count Caprivi’s Folly
Caprivi’s place in the pages of romance and history
5. Where Angels Gaze
Victoria Falls and pioneer times in their vicinity
6. Stone and Iron
Early man on the Zambezi
7. Beads, Bangles and Barter
Early trade and its development
8. Kariba
The lake, 30 years on
9. Matters Aquatic
Aquatic weeds and fish
10. Gnat Chat
Insects, parasites and diseases that plague life on the river
11. A Bird in the Bush
Trees and birds of the Zambezi
12. The Zambezi Menagerie
Some mammals and reptiles of the Zambezi
13. Great Zambezi Myths
The Mwene Mutapa empire, the Zambezi’s iron god and the two-toed people
14. Woollen Hats and Brass Potties
The first Portuguese centuries in Mozambique
15. Cannibals and Concubines
The Portuguese from the 17th century to recent times

This is an extract from the book: Zambezi. Journey of a river, by Michael Main.

Previous post Will there be an "Easyhotel" in Victoria Falls before there is a low cost airline flying here?