An African Safari Along the Zambezi River 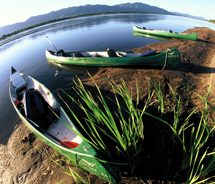 Many African safaris follow the Zambezi River from Victoria Falls

For many, the African safari experience begins along the mighty Zambezi River, the lifeblood of Southern Africa, its serpentine flow separating Zambia and Zimbabwe. Victoria Falls — or Mosi-o-Tunya (the Smoke that Thunders) — is the starting point for many tours, including ours organized by David Anderson Safaris. More than 3,200 feet wide and 325 feet tall, Victoria Falls is the largest curtain of water on the planet. It is also one of the seven natural wonders of the world.

Lake Kariba
Our African safari began and ended in this quiet hub. After flying over the awe-inspiring Victoria Falls, we landed downriver on Lake Kariba in Zambia. Then, we took a boat over to Steve Edwards’ Musango Safari Camp in Matusadona National Park in Zimbabwe. After serving as a game warden and safari guide for 18 years for the Department of National Parks and Wildlife Management in Zimbabwe, Edwards retired in 1990. His rustic island camp features tented accommodations, an open veranda and a bar where visitors can frequently spot hippos, crocodiles, malachite kingfishers and goliath herons.

Edwards knows every nook and cranny of Lake Kariba, and close encounters with elephant, Cape buffalo, waterbuck, bee-eaters and saddle-billed storks are common. Not a minute is wasted exploring every available cove on a specially designed open pontoon boat, making it easy to move around with a camera on a tripod. Our last sundowner revealed an African fish eagle silhouetted on a dead tree and engulfed in orange and yellow hues.

Mana Pools
After a week at Musango, we caught a small plane to Mana Pools National Park in Zimbabwe, which is located farther down the Zambezi. Ruckomechi Camp rests on the banks of the river, offering game drives and canoe trips.

A luxury tented camp nestled in a grove of acacia and mahogany trees, Ruckomechi boasts superb views of the mountains of the Great Rift Valley. When we weren’t bouncing along in the 4×4, we were relaxing at Ruckomenchi, at the edge of the river, watching hippos, crocodile and elephants parading up and down the shallows.

During a sunset canoe ride, we steered our boats into the main channel of the Zambezi, easily maneuvering down the river, shrouded in mist. While a Land Rover waited for us several miles farther downstream, we counted crocodiles and monitor lizards on the muddy banks and on crowded sandbars. Hippos charged at us creating small waves that gently rocked our canoes. They snorted and splashed, but quickly made room for herds of elephants that came down for an afternoon bath in the river.

We reached the Land Rover at dusk where our safari guide awaited with sundowners in hand. The low roar of the river was soon interrupted by yelping hyenas and the roar of resident lions, the Zambezi teeming in the African night. 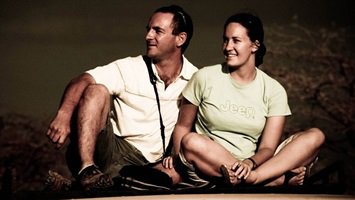