Leg two of our trip around Africa once again started with a pre-dawn breakfast at our only hotel stay for another three weeks, before we were off to the Botswana border crossing and our camp in the Kalahari Desert. We cleared the border without incident after hiding all of the meats and cheeses on our truck under our seats to smuggle them into the country, and again during two checkpoints along the highway…at least the police at the check points were nice enough to pass out condoms to us so we could stay safe :0 Traveling seems to be somewhat slow in Botswana with good roads but many check points as well as free range cattle and goats to negotiate along the way.

We were treated to a chilly evening (Africa has been surprisingly cold so far, often approaching freezing temperatures overnight) of traditional dancing around the camp fire by the San Bushmen of the area, before returning to the relative warmth of our tents and sleeping bags.

The following morning we again met up with the bushmen and headed out for a walk where they showed us some of the healing plants they use and how they make fire using only sticks and grass. Sadly, this is one of only a handful of traditional bushmen tribes remaining, who still live mostly off the land and do not speak English, only their traditional language that includes ‘clicks’. 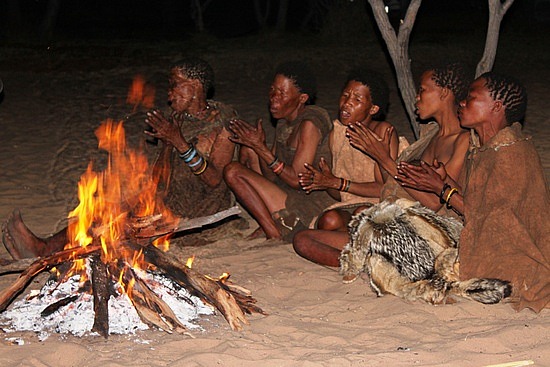 San Bushmen around the fire

After saying goodbye to the Kalahari and bushmen, we headed to Maun to restock our supplies and then headed into the Okavango Delta for two nights of ‘bush camping’ on a combination of motor boats and dugout canoes piloted by local polers. Here we had no permanent facilities, although we did pack a ton of gear in, as the islands and camping sites change and disappear throughout the year as the water levels change in the delta. We spent the days hanging out in camp, trying out our poling skills on the mokoros, going for game walks and heading back on the water for the sunsets complete with hippos. We were lucky enough to spot several giraffes and zebras on our game walk, and even had a close encounter with a lone bull elephant. We didn’t see nearly as many animals as we had in the game parks, but the experience seemed much more real being on foot and in the true wild with animals that were not used to human presence, and are still hunted by the locals as we saw when we passed by an active elephant hunt camp on the mokoros.

Some our group decided to pass on the game walk and instead took a couple of the boats back to a village to purchase a goat which then became our dinner, which we enjoyed cooked over our camp fire followed by an evening a singing and dancing by the locals…and the worst beer I have ever tasted. Not just the worst beer I have ever tasted, but possibly the worst thing I have ever tasted. The ‘beer’ came in cardboard cartons and was sour, had a milky texture and still had lots of chunks of whatever it was brewed from in it, and had a strong aftertaste and smell of yeast almost as if it was only halfway through the fermentation process. Disgusting. 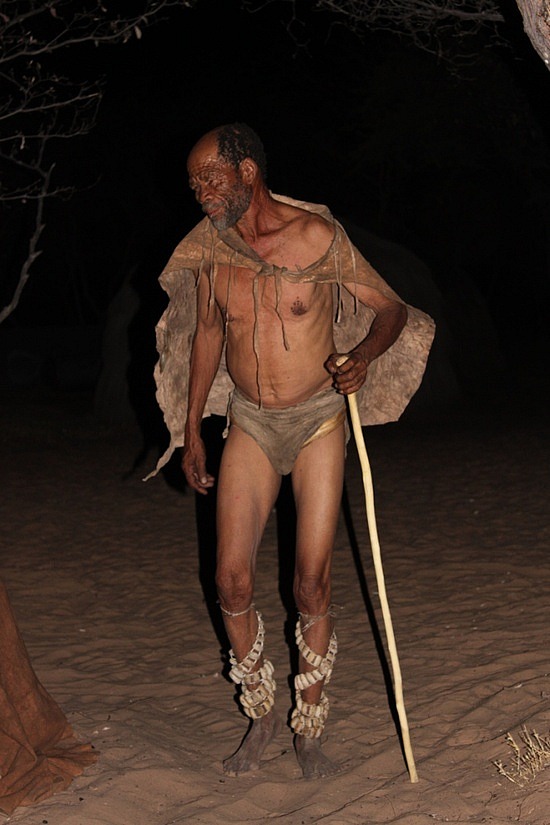 Next we moved onto a night in Chobe Park we were went on a sunset ‘sociable’ cruise where we saw loads of hippos, elephants, crocs and our first buffalo as we made our way through an ice chest full of booze. The party continued well into the morning in the campsite bar, but luckily we had our first chance to sleep in the next day (until 8am) after seeing 18 of the previous 19 sunrises! We have absolutely loved our travels through Africa so far, but the cold nights and predawn mornings have been a bit more than we expected.

We have now crossed from Botswana into Zambia and have a few days to spend near Victoria Falls in the adventure capital of Africa, Livingstone. So far we have rafted the class 5 Zambezi River and Bungee jumped off the 111m Victoria Falls Bridge, which was once the highest bungee in the world. We also golfed a round at the Royal Livingstone Golf and Country Club, complete with our own caddies, who for $5 a round would also stand 150 yards out in the driving range to collect the balls we hit at them. It was a very interesting experience golfing with a caddy, but fun!

Ciao until Zanzibar in a couple of more weeks. 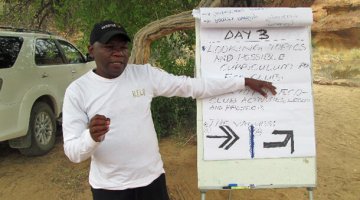