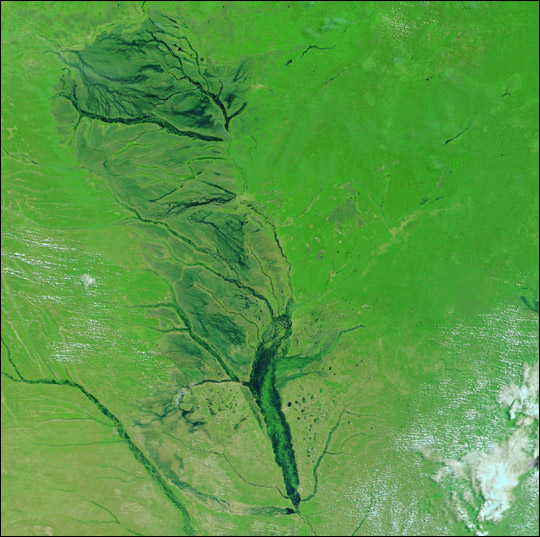 On April 12, 2004, the clouds that typically shroud Western Zambia this time of year cleared long enough to give the modis.gsfc.nasa.gov Moderate Resolution Imaging Spectroradiometer (MODIS) on the terra.nasa.gov/ Terra satellite this clear view of the flooded Zambezi River. The river floods during the rainy season every year, but this year, the waters are higher than usual.

Recent news reports say that 21,000 households in Western and Northwestern Zambia have been affected by the Zambezi floods so far. The flooding began in December 2003, and increased as the region received far more rain than normal. Now the river is covering most of the plains that line its banks, limiting access to the schools and health centers that are not submerged. Fields of maize and rice have also been covered by the floods.

The high waters on this stretch of the Zambezi are also troubling to the already water-logged communities downstream. As these flood waters have moved down into northeast Namibia’s Caprivi Strip, they have affected 20,000 people, killing six. Now officials expect the river to continue to expand in the coming weeks.

This image shows the Zambezi River in Zambia just north of the Namibian border. Flowing down across the lower left corner of the image is the Cuando River, which also appears to be flooded with black water surrounding the green lines that mark the river’s usual banks. This section of the Cuando River runs along the border of Zambia and Angola. In this false color image, water is black, and vegetation is bright green. A few white and light blue clouds skirt the edges of the scene.

The high-resolution image provided above is at MODIS’ maximum resolution of 250 meters per pixel. 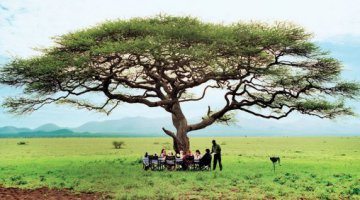