Safari by water in southern Africa 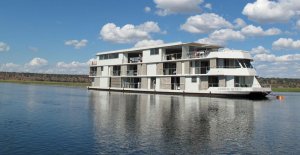 The Zambezi Queen, a sleek 14-room river boat, sails along the Chobe River, through one of Africa’s densest concentrations of wildlife. (Colleen Clark)

The first saffron rays of sunrise bled into the deep purple sky above the Chobe River. An onyx-winged cormorant arced downward, diving below the inky water while a hippo yawned its tusky jaws. Two villagers skimmed silently along in dugout mokoros, and pied kingfisher birds sung out “Tree-ti-ti, tree-ti-ti”. This was my wake-up call aboard the Zambezi Queen, Africa’s first eco-friendly water safari.

The sleek 14-room river boat sails the sprawling waters of the Chobe River between Botswana’s Chobe National Park and Namibia’s Caprivi Strip, which together contain one of Africa’s densest concentrations of wildlife. Since 2010, the Zambezi has offered an alternative safari experience: instead of staying in a lodge at night and venturing out into the gameparks in jeeps by day, travellers eat, sleep and breathe the life of the floodplains.

And so it was that I awoke, unsure but uncaring of the time, to observe the morning rituals of the river. From the banks, our boat must have looked a bit like some floating cubist sculpture, its white angular structure scored by floor-to-ceiling windows striped with balcony railings, its monochromatic figure floating in a backdrop of clear blue sky.

Free from the siren call of wi-fi (the Zambezi chooses not to offer it) and clocks, I began opening up to my surroundings. I noticed the way the ripples of the river mimicked the corrugated roofs of the local village huts. I picked out the separate voices in the chorus of birdsong — the rowdy squawk of the lilac breasted roller, the throaty rick-rack of the cattle egret, the gurgle of the white-fronted bee-eater. After dark, I lost hours counting falling stars beneath the dotted canopy of the Milky Way, its sparkling dome mirrored in the placid waters below.

The boat itself is configured for just this kind of discovery. Lighting changes over the course of the day to keep the focus on the outdoors. They eschew dinnertime music in favour of the natural sounds of the river. And they request that those who do manage to find mobile service refrain from making calls in shared common areas. The muted subtlety of the décor, the predominance of overstuffed pillows and soft couches all combine to create a mellow, homey vibe — the kind of laidback environment you can wallow in like a hippo.

The crew is also acutely aware of their place in this fragile ecosystem. The Zambezi runs on jet propulsion to avoid damaging the riverbed. Hot water comes courtesy of solar panels. And generators are shut off at night, saving power and reducing the noise pollution that could distract you from your pied kingfisher wake-up call.

Though it would be easy to spend every day watching the world awaken from the comfort of the fluffy white beds, I wanted to get closer to the action, so I hopped on one of the small launch boats that ferries guests to a land-based safari. We zipped past islands of emerald hippo grass and pairs of moody crocodiles, docking on the Botswana side of the river.

Because the Chobe divides Botswana and Namibia, you have to stamp in and out of each country several times during your stay, a quick informal process — you can even take along your Windhoek beer— that leaves you with pages of passport stamps and a friendly rapport with both countries’ immigration staffs.

Then, it was into a Land Rover to get a closer look at the sprawling landscape I had been admiring from afar. And when I say close, I mean close. Due to stringent conservation measures from the Botswana government, poaching has never been a problem in Chobe National Park. As a result, animals have little fear of humans. The tawny-coated kudu with its noble spiralling horns barely acknowledged our vehicle’s approach across the hot sand by the river. Giraffes ignored us as they ambled gracefully across the red clay road. Our guide easily picked up a prehistoric dung beetle before setting it free to scurry over droppings left by elephants. And many of those beautiful multi-ton pachyderms lumbered within a hair’s breadth of our vehicle.

This land-based game drive is one of many ways that the Zambezi Queen brings guests into direct interaction with their environment. A similar drive might be followed by a fishing excursion to take on the formidable hunting tiger fish. Or water-based safaris in small guide boats that dip in close to the riverbank to observe dinosaur-like monitor lizards sunning themselves on logs, kingfisher eagles perched in trees, and elephants playfully spraying water on their young. Or you can choose to do none of the above and simply take it all in from the top deck being lolled into the rhythm of the river.

On the last day of my stay, I climbed in for a ride in a traditional mokoro. The flat-bottom boat balanced precariously just barely above water level, a skilled rower standing and pushing gondola-style from the back. With each early stroke, with each pitch and roll, I felt certain I would upset its delicate balance and topple into the unknown dangers lurking beneath. But then I relaxed and let my gaze rest on the delicate white water lilies, the small eddies and ripples of our boat skimming the surface, the knots and gnarls of the mokoro’s wood. From then-on it was smooth sailing. 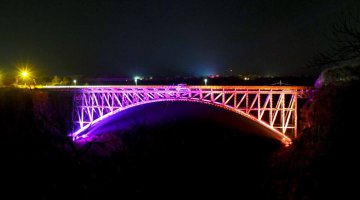