The following highlights are only a selection as some of the featured Southern African countries have more than one UNESCO World Heritage Site. The activities at or around the sites are limitless. What better way to view game than hot air ballooning over the Serengeti National Park, with its incredible wild and bird life as well as a huge variety of excellent accommodation. The central market in the Stone Town of Zanzibar is a vibrant meeting place with many colourful and interesting artifacts for sale while Lake Malawi National Park, with its temperate climate, has beautiful holiday resorts which cater for the whole family. Here and around the Island of Mozambique unbelievable diving and snorkelling is available.

The archaeologist and adventure enthusiast will delight in rock art and formation as well as beautiful nature hikes at Twyfelfontein (also Ui-Ais), Mapungubwe Cultural Landscape and Tsodilo, the latter offering a campsite in the heart of San rock paintings. Robben Island, 12 kilometres by boat from Cape Town, affords photographers opportunities to capture beautiful shots of the city and the Table Mountain panorama. The spectacular Victoria Falls or Mosi-o-Tunya (the smoke that thunders), is definitely the place for adrenaline junkies with breathtaking white water rafting (grade 5) through a myriad of rapids on offer as well as a 111 metre bungy jump and canoeing on the Zambezi.

The Serengeti National Park in Tanzania comprises some 1.5 million hectares and contains the largest herds of grazing animals in the world. The great migrating herds and their predators are continuously moving through this ecosystem, but the famous annual wildebeest and zebra migration is most impressive in May and June.

The old part of Zanzibar city, the Stone Town of Zanzibar / Tanzania was one of the main slave-trading ports in East Africa. Today a huge attraction of historical and symbolic importance, its buildings, mostly from the 19th century, show elements of different cultures, i.e. Swahili, Persian, Indian & European.

Lake Malawi National Park is situated at the southern end of the lake in the golden heart of Africa, Malawi, and was designated to protect fish and aquatic biotops. Due to its many endemic fish species (over 90%) which are a key example of specialised evolution it was declared a UNESCO World Heritage Site.

The Island of Mozambique used to be a Portuguese trading post off northern Mozambique on the maritime routes between Western Europe and India / all of Asia. It saw the trading of slaves, spices and gold and was an important missionary centre. Its remarkable architectural unity of local traditions, mainly Portuguese influence and few Indian / Arab elements is outstanding.

At South Africa’s northern border, Mapungubwe Cultural Landscape is a vast savanna at the confluence of Shashe and Limpopo rivers. The largest kingdom in Southern Africa until the 14th century, Mapungubwe society was the most complex in the sub-continent and thought to be the first Southern African class-based social system, which shows in its spatial expansion and architecture.

Robben Island lies in the Atlantic Ocean west of Cape Town / South Africa. Today an open-air museum, it was used at different times between the 17th and 20th centuries as a maximum-security prison for political prisoners and a hospital for socially unacceptable people as well as a military base. Its buildings bear historical testimony of the triumph of democracy and freedom.

Twyfelfontein is Namibia’s first World Heritage Site and has one of the largest concentrations of rock engravings / paintings in Africa – over 5000 motives and associated Late Stone Age material culture have been counted so far, which offer a high quality record of ritual practices from hunter-gather communities in this part of southern Africa over many millennia.

Tsodilo is situated in the Kalahari Desert in the North-west of Botswana. Its hills are of unique religious and spiritual significance to the local San people. Due to its record of human settlement over many millennia more than 4,500 rock paintings have been found in an area of ca. 10 square kilometres – world-wide one of the highest concentration of rock art and rock paintings.

One of the world’s 7 natural wonders, the Victoria Falls in full flood is world-wide, the largest curtain of falling water. Here, at the Zambia/ Zimbabwe border, the Zambezi River is more than 2kms wide and plunges noisily down a couple of gorges. An amazing example of erosive water forces and river capture, this site is 1708 metres wide and at its highest point 99 metres. 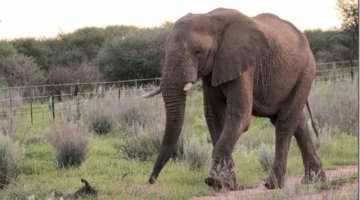 Namibian Elephant in the Farmlands